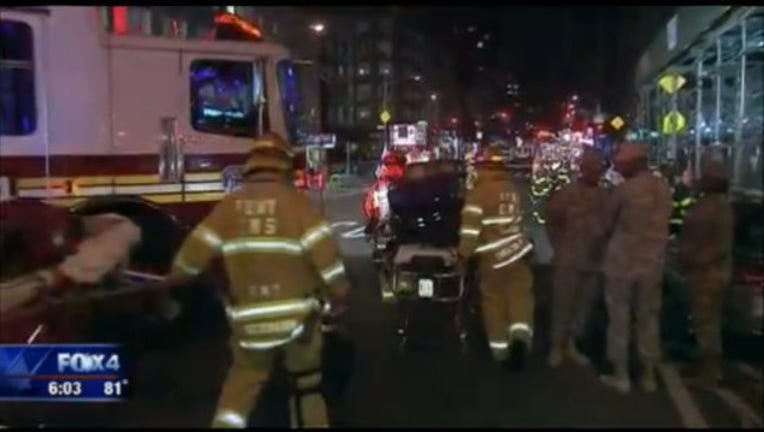 NEW YORK (AP) — Investigators scrambled Sunday to find out who planted a bomb that rocked a bustling New York City neighborhood, scouring shrapnel, forensic traces and surveillance video for any link to an unexploded pressure-cooker device found just blocks away.

Hours after the Saturday night blast that injured 29 people in Manhattan, there seemed to be more questions than answers. All the injured had been released from the hospital by Sunday afternoon.

"We just know there was a bombing," Mayor Bill de Blasio said at briefing at New York Police Department's headquarters. "That much we do know."

Gov. Andrew Cuomo, who toured the site of the blast in Manhattan's Chelsea neighborhood, said there didn't appear to be any link to international terrorism. He said a second device found blocks away from the bombing appeared "similar in design" to the first.

That device — described by a law enforcement official as a pressure cooker with wires and a cellphone attached to it — was removed early Sunday by a bomb squad robot and was being examined by forensic experts. The official spoke on condition of anonymity because the official was not authorized to speak publicly about an ongoing investigation.

Homemade pressure cooker bombs were used in the Boston Marathon attacks in 2013 that killed three people and injured more than 260.

The Manhattan blast followed a pipe bomb explosion earlier Saturday in Seaside Park, New Jersey, before the start of a charity 5K race to benefit Marines and sailors. The devices contained different materials and didn't appear to be connected, officials said, but added that they weren't ruling anything out yet. The race was canceled and no one was injured.

The New Jersey device contained evidence of a black powder, while the device that exploded in Manhattan had residue from an explosive called Tannerite, said a federal law enforcement official, who spoke on condition of anonymity because he wasn't authorized to discuss details of the ongoing investigation.

Tannerite is often used in target shooting to mark a shot with a cloud of smoke and small explosion.

The Saturday night bombing rocked Manhattan's Chelsea neighborhood, a mostly residential area on the city's west side known for its art galleries and large gay population. The explosion left many rattled in a city that had marked the 15th anniversary of the 9/11 terrorist attacks only a week earlier.

A federal law enforcement official told the AP on Sunday that the FBI was evaluating a claim of responsibility for the New York City bombing on the social blogging service Tumblr. The official, who wasn't authorized to discuss an ongoing investigation by name and spoke to the AP on condition of anonymity, said the FBI was aware of the posting and was working to determine its authenticity.

Witnesses described hearing a deafening blast, and surveillance video footage captured images of nearby windows being blown out by the explosion as people sprinted away from the scene.

"It was extremely loud, almost like thunder but louder," said Rudy Alcide, a bouncer at a nightclub near the blast.

Members of the FBI's Joint Terrorism Task Force were investigating the blast along with New York Police Department detectives, fire marshals and other federal investigators. As a precaution, Cuomo said he was deploying an additional 1,000 state troopers and members of the National Guard throughout New York City and police officials promised more officers on the streets ahead of a United Nations meeting on Monday to address the refugee crisis in Syria.

The first device, which exploded on West 23rd Street at about 8:30 p.m., appeared to have been caused by an explosive device placed inside a toolbox in front of a building undergoing construction, the law enforcement official said.

The second device, found later inside a plastic bag on West 27th Street, appeared to be a pressure cooker with wiring and a cellphone attached to it, the official said.

Federal investigators in Quantico, Virginia, were examining evidence from the explosions in New York and New Jersey.