MIAMI - Floridians living in Miami will be waking up Sunday to the city’s coldest temperatures in more than 11 years.

Temperatures Saturday evening into Sunday morning are expected to drop into the 30s in South Florida, with a low of 39 degrees expected in Miami. 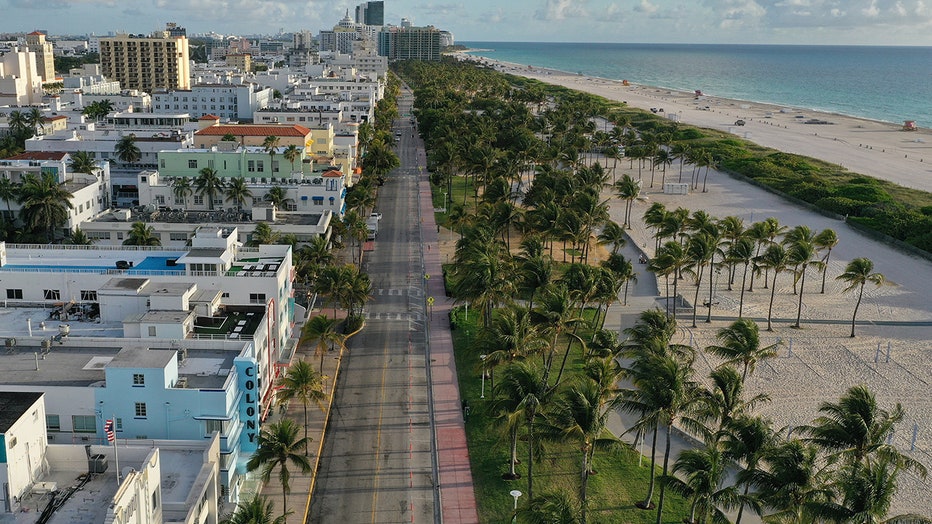 In this aerial view from a drone of Ocean Drive in Miami, Florida. (Credit: Joe Raedle via Getty Images)

According to FOX Weather meteorologists, the last time temperatures dropped below 40 degrees in Miami was on Dec. 28, 2010.

A 1966 record for Lakeland, in Central Florida, could also be broken Sunday morning when temperatures reach a low of 27 degrees. Orlando, Fort Myers and Fort Lauderdale could also see record cold.

How cold will it get in South Florida, Miami?

High temperatures on Saturday are forecast to not get out of the 50s over most of the area, and even southern areas around Miami may struggle to reach 60 degrees under clearing skies and gusty northwesterly winds.

This will set the stage for the coldest night and morning, which will likely be Saturday night and Sunday morning, when temperatures drop to freezing and near-freezing levels.

The National Weather Service issued a Hazardous Weather Outlook for Sunday, prompting significant and extreme cold risk levels for South Florida. This means frostbite and hypothermia in these areas are possible or likely with prolonged exposure. 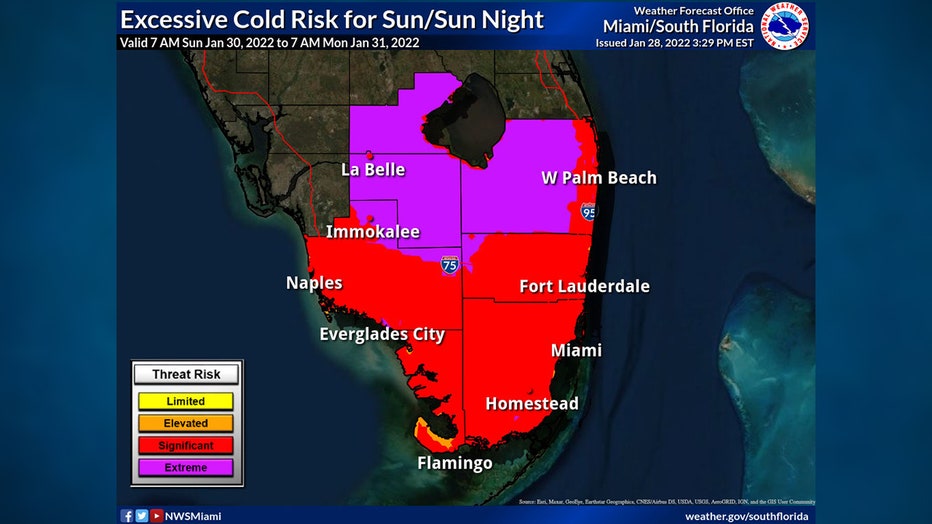 In these areas, the duration of temperatures of 32 degrees or below could be as much as four hours.

The lowest wind chill readings early Sunday could be in the 20s around Lake Okeechobee, and near 30 to the lower 30s elsewhere.

Forecasters warn of falling iguanas as temperatures drop in Florida

Forecasters are warning this week for possible "falling iguanas" due to Florida's upcoming cold snap.

Because iguanas are cold-blooded, iguana's bodies can stiffen up and fall out of trees, appearing to be dead. Once temperatures reach the 40s, they become immobile.

These lizards have caused damage to infrastructure, including seawalls and sidewalks, according to agencies in charge of managing the hundreds of miles of canals that channel water throughout South Florida

How long will cold weather stick around in Florida?

The cold air mass in Southern Florida will keep afternoon highs Sunday in the mid 50s to low 60s. This will follow another cold morning on Monday, but not nearly as cold as Sunday morning’s lows.

FOX Weather contributed to this story.