The student's mom shared the sweet image on social media in hopes of bringing further attention to the custodian for her genuine act of kindness.

ALVIN, Texas - A touching photo shared by the mother of a young student with autism shows how a little bit of compassion can make a world of difference in the life of a child.

Kenlee, a 4th-grade student at Melba Passmore Elementary School in Alvin, Texas, wanted “no part of being in the cafeteria” with “all of the noise,” according to a Sept. 10 Facebook post by her mother, Hollie Bellew-Shaw.

Overwhelmed, Kenlee grabbed a blanket and decided to lie down on a nearby stage. That’s when Esther McCool, a beloved custodian at the school, noticed Kenlee and laid down next to her, patting her on the back for comfort. 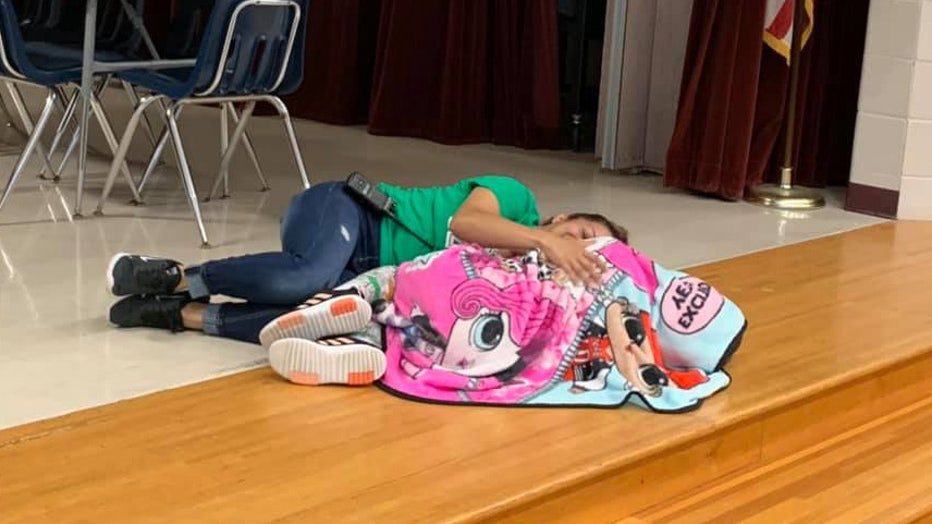 "Kenlee adores Mrs. Esther,” Bellew-Shaw said. “She always greets my daughter with kind words and a hug which is so special to her.”

Bellew-Shaw shared the sweet image on social media in hopes of bringing further attention to the custodian for her genuine act of kindness, whom she called “the best, sweetest individual in the world.”

“All schools should be so lucky to have their own Angel on campus,” Bellew-Shaw wrote in the post. “Feel free to share so she can get all the appreciation & thanks she totally deserves.”

The photo was also shared by the Alvin Independent School District, which prompted other parents to add their appreciation for the custodian.

“Passmore is blessed to have Esther!! She is one-in-a-million,” one person commented.

“Esther is the best! She goes above and beyond,” another person shared.

Renae Rives, the district’s director of communications, said McCool has worked for the district for six years.

“She loves those kids,” Rives said.