North Carolina District Attorney Andrew Womble said at a press conference on Tuesday that the deputy-involved shooting of Andrew Brown Jr. "while tragic, was justified."

ELIZABETH CITY, N.C. - The three deputies involved in the killing of Andrew Brown Jr. last month in Elizabeth City will keep their jobs after being disciplined and retrained, Pasquotank County Sheriff Tommy Wooten II said Tuesday just hours after a district attorney said the deputies were justified in their actions.

Earlier on Tuesday, District Attorney Andrew Womble said during a news conference that Brown’s actions caused deputies to believe it was necessary to use deadly force. He said that Brown ignored deputies' commands to stop and began to drive his car directly at one of the officers before they fired any shots.

"Mr. Brown’s death, while tragic, was justified because Mr. Brown’s actions caused three deputies with the Pasquotank County Sheriff’s Office to reasonably believe it was necessary to use deadly force to protect themselves and others," he said.

Womble said he would not be filing criminal charges against any of the deputies, who were attempting to serve drug-related search and take Brown into custody.

Wooten later released a video announcing the staffing decision. Wooten said the decision was made after he reviewed his department’s internal investigation, discussed the case with national, independent experts and looked at all the body cam footage, which has yet to be released publicly.

Womble played portions of the video during the news conference, which was broadcast by multiple news outlets. He said he was able to display a portion of the bodycam footage at this point because it wouldn’t interfere with a criminal case since he was not pursuing charges. He said any release of the full video would still need to have a judge’s approval.

Under North Carolina law, a judge must generally sign off on the release of law enforcement body camera footage. While authorities have shown the footage to Brown's family, a judge previously refused to release the video publicly pending the state investigation.

Wooten said he plans to once again ask a judge to allow the full video to be made available to the public.

Wooten said he also plans to release portions of his office’s internal investigation and an independent expert’s preliminary report. 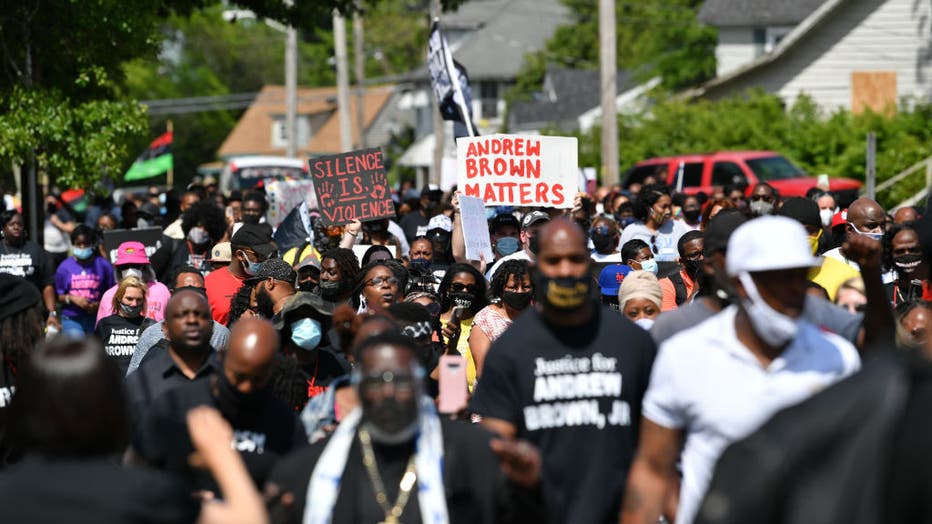 People stage a demonstration after the killing of Andrew Brown Jr. demanding the release of the body camera videos the day before the funeral in Elizabeth City, NC, on May 2, 2021. (Photo by Peter Zay/Anadolu Agency via Getty Images)

Brown was shot and killed outside his home on April 21, located about 50 miles south of Norfolk, Virginia. The three deputies involved — Investigator Daniel Meads, Deputy Robert Morgan and Cpl. Aaron Lewellyn — have been on leave since the shooting.

Four others who were at the scene were reinstated after the sheriff said they didn't fire their weapons.

Womble said the first shot fired at Brown’s car went through the front windshield, not the back as was previously reported.

"I find that the facts of this case clearly illustrate the officers who used deadly force on Andrew Brown Jr. did so reasonably and only when a violent felon used a deadly weapon to put their lives in danger," Womble said, referring to Brown's car.

The district attorney’s announcement came after reviewing the results of a State Bureau of Investigation probe of the fatal shooting.

Wooten detailed Tuesday several errors deputies made that they will be disciplined for, including two not turning on their body cameras and for not having an EMS on standby. Wooten said he will also now make every risk assessment for serving warrants standardized and be put in writing.

The shooting sparked protests over multiple weeks by demonstrators calling for the public release of body camera footage.

An independent autopsy released by the family found that Brown was hit by bullets five times, including once in the back of the head. Lawyers for Brown's family who watched body camera footage say that it shows Brown was not armed and that he didn't drive toward deputies or pose a threat to them.

Womble has previously disagreed in court, saying that Brown struck deputies twice with his car before any shots were fired. The sheriff has said his deputies weren't injured.

Separately, the FBI has launched a civil rights probe of the shooting.

"This should not have happened this way at all. While the deputies did not break the law, we all wish things could have gone differently - much differently. I continue to pray for them and hope they will find peace."