Amy Coney Barrett gave an opening statement Oct. 12, 2020 at the confirmation hearings for the Supreme Court.

WASHINGTON - The Senate Judiciary Committee on Thursday formally scheduled to approve Judge Amy Coney Barrett’s nomination to the Supreme Court following three days of hearings this week. The senators also heard from a panel of law experts and advocates who testified for and against Barrett’s nomination.

Barrett, a 48-year-old federal appeals court judge and devout Catholic, has presented herself in two days of questioning as a judge with deeply held religious beliefs but vowed to approach each case with an “open mind.”

The committee set the vote for Oct. 22 at 1 p.m. ET. A confirmation vote by the full Senate is expected before the Nov. 3 election.

Thursday’s meeting was a procedural formality without Barrett present. Sen. Lindsey Graham, R-S.C., pushed past Democratic objections to set the panel's vote on recommending her confirmation even before the witnesses.

“This is a sham," said Sen. Amy Klobuchar, D-Minn.

“You don't convene a Supreme Court confirmation hearing, in the middle of a pandemic, when the Senate's on recess, when voting has already started in the presidential election in a majority of states,” added Sen. Chris Coon, D-Del.

But Republicans countered that President Donald Trump is within bounds as commander-in-chief to fill the court vacancy, and the GOP-controlled Senate has the votes to push Trump's nominee to confirmation.

Sen. John Cornyn, R-Texas, said he understands Democrats' “disappointment, but I think their loss is the American people's gain.” 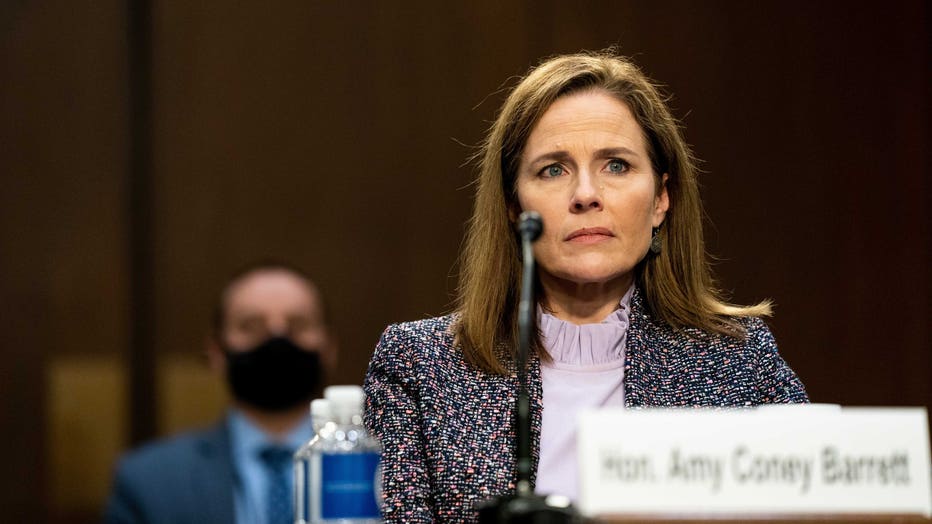 Facing almost 20 hours of questions from senators on the committee this week, Barrett has promised to bring no personal agenda to the high court but to decide cases “as they come.” She has remained neutral on many issues, asserting it's against judicial code at this point to say whether she would overturn the Affordable Care Act or how she would vote on other politically fraught issues, including abortion.

She was careful not to take on Trump who nominated her and sought to separate herself from writings on controversial subjects when she was an academic. She skipped past Democrats’ pressing questions about ensuring the date of next month's election or preventing voter intimidation, both set in federal law, and the peaceful transfer of presidential power.

California Senator and Democratic vice-presidential nominee Kamala Harris asked Barrett is she agreed with a sentence from a 2013 opinion by Chief Justice John Roberts, in which he wrote that “voting discrimination still exists; no one doubts that.”

Barrett responded, saying she would “not comment on what any justice said in an opinion.”

She also refused to express her view on whether the president can pardon himself. “It’s not one that I can offer a view," she said in response to a question Wednesday from Democratic Sen. Patrick Leahy of Vermont. Democrats raised those questions because Trump has done so himself.

Her confirmation to fill the vacant seat left behind by the late Justice Ruth Bader Ginsburg, a liberal icon, would tip the balance of the court to a 6-3 conservative majority.

Sen. Feinstein asked Barrett if President Donald Trump has the authority to delay the general election after floating the idea in July.

The Republican-controlled Senate has been pushing for a quick vote before the Nov. 3 election and ahead of the latest challenge to the Affordable Care Act, which the Supreme Court is to hear on Nov. 10. Many questions from Democrats centered on this topic, with many fearing that she would be a vote to undo the “Obamacare” law — which gives more than 20 million Americans health insurance coverage.

Barrett has said this week that she’s “not here on a mission to destroy the Affordable Care Act.”

"I'm just here to apply the law and adhere to the rule of law," she told senators.

Witnesses on Thursday testified, including representatives of the American Bar Association's standing committee which gave Barrett its highest “well qualified” rating — but not unanimously. Barrett is the first high court nominee since Justice Clarence Thomas not to earn a unanimous rating.

Kristen Clarke, the president of the Lawyers Committee on Civil Rights opposing Barrett's nomination, said the judge's unwillingness to speak forcefully for the Voting Rights Act should “sound an alarm” for Americans with a case heading to the high court.

“Our nation deserves a justice who is committed to preserving the hard-earned rights of all Americans, particularly the most vulnerable,” said Clarke.

Retired appellate court Judge Thomas Griffith assured Barrett is among justices who “can and do put aside party and politics.”

Among those testifying was Michigan primary care doctor Farhan Batti who warned of the toll on his patients if the Supreme Court does away with the health care law and Crystal Good, a writer from West Virginia, who told the very personal story of seeking an abortion as a sexually-abused teen-ager.

“Hear us when we ask you not to approve this nomination,” she implored the senators.

Barrett repeatedly promised to keep an open mind when it comes to major issues that are likely to come before the court, including abortion, and said neither Trump nor anyone else in the White House had tried to influence her views.

“No one has elicited from me any commitment in a case," she said.

Barrett is the most open opponent of abortion nominated to the Supreme Court in decades, and Democrats fear that her ascension could be a tipping point that threatens abortion rights.

Graham called Barrett an “unashamedly pro-life” conservative who is making history as a role model for other women.

Barrett refused to say whether the 1973 landmark Roe v. Wade ruling on abortion rights was correctly decided, though she signed an open letter seven years ago that called the decision “infamous.”

Judge Amy Coney Barret on being dubbed a female Scalia

Senate Judiciary Committee Chairman Lindsey Graham, R-S.C., who is presiding over the hearings, asked Barrett about her comparison to the late Justice Antonin Scalia. The conservative judge was a mentor of Barrett’s.

Regarding the upcoming presidential election, being held in less than three weeks, Trump has publicly stated he wants a justice seated for any disputes arising from the election, and particularly the surge of mail-in ballots expected during the coronavirus pandemic as voters prefer to vote by mail.

Barrett testified she has not spoken to Trump or his team about election cases, and declined to commit to recusing herself from any post-election cases.

RELATED: What happens if 2020 election is contested? Here are possible scenarios