FORT WORTH, Texas - As temperatures drop into the low 30s on Monday, local heating and air conditioning companies were bombarded by calls from homeowners who turned on the heat only to find out something was wrong.

Heating and air conditioning companies say they had an average of 22 calls an hour before 5 p.m. After the workday ended, they got even more calls from people just getting home and discovering their heaters weren’t working.

It was a busy day for Berkey’s service technician Glen Gebauer. 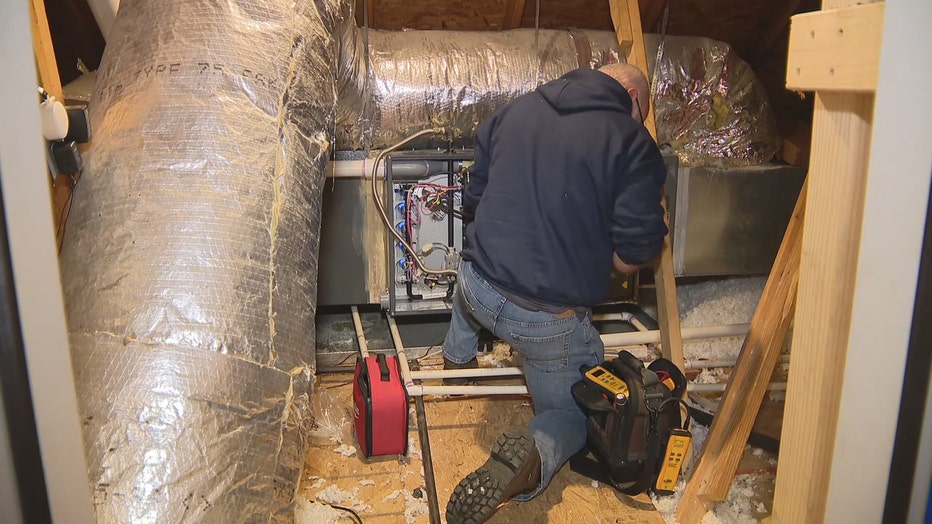 “Right now, we’re getting a lot of calls for maintenance inspections, not working furnaces, people wanting to make sure they’re safe to start them up,” he said.

Gebauer’s third stop of the afternoon was at Joyce Chan’s home where the heating system has been malfunctioning for the last seven days.

“Once we stepped outside and it started raining, it was kind of scary thinking that my kids weren't going to get heat in their rooms,” Chan said.

As Monday’s cold snap hit, the mom of two is one of many homeowners in the Metroplex calling professionals for help.

Sometimes it’s a quick fix, but Gebauer Chan’s system needs new piping and he’ll have to bring backup for a full repair. It's working well enough to provide Chan and her kids heat until he returns Tuesday to finish the job.

Gebauer says most HVAC systems in Texas last for an average of 12 to 15 years, but he warns against waiting until the last minute for a checkup.

“You should have two inspections a year: one before the heating season and one before the cooling season,” Gebauer said. “That way, you know your system is up and ready to go.”

Chan says she’s glad to cross the broken heater off of her cold weather to-do list and looks forward to having a toasty home in the coming days.

“It reminds me of my days back in New York,” she said. “I moved to Texas for a reason: that’s to get away from the cold weather.”

Gebauer says they expect to be busy until January.