Amber Guyger arrived at the court building as a defendant. A few hours later, she left as a convict.

DALLAS - A former Dallas police officer who fatally shot an unarmed man in his apartment was found guilty of murder by a Dallas County jury on Tuesday.

Guyger was off-duty but still in uniform after a long shift in Sept. 2018 when she fatally shot Botham Jean, a 26-year-old accountant from the Caribbean nation of St. Lucia.

It took the jury about six hours over two days to arrive at the verdict. The jury that convicted Guyger was largely made up of women and people of color.

Cheers erupted in the courthouse as the verdict was announced, and someone yelled: "Thank you, Jesus!" In the hallway outside the courtroom where Guyger was tried, a crowd celebrated and said "black lives matter" in raised voices. When the prosecutors walked into the hall, they broke into cheers.

Guyger sat alone weeping at the defense table. She was comforted by a bailiff who gave her tissues and seemingly spoke words of comfort before Guyger walked out with her stunned attorneys.

It was a stark contrast to the other side that sat Jean’s family. There were hugs and tear and outstretched arms in praise from his loved ones. 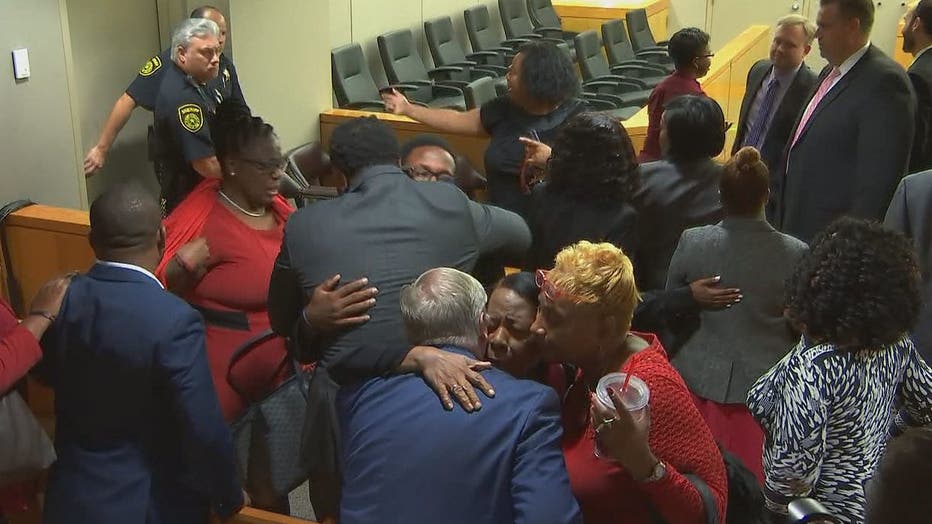 The family of Botham Jean hugs each other after hearing that Amber Guyger was found guilty of murder.

The basic facts of the shooting were not in dispute throughout the trial. On September 6, 2018, Guyger walked up to Jean's apartment -- which was on the fourth floor, directly above hers on the third -- and found the door unlocked. She was off duty but still dressed in her police uniform after a long shift when she shot Jean with her service weapon. The 26-year-old accountant had been eating a bowl of ice cream before Guyger entered his home.

“Although he was murdered, I’m convinced that justice is experiencing a resurrection here in Dallas that’s long overdue,” said Rev. Dr. Frederick Haynes with Friendship West Baptist Church. “Unfortunately, it took the death of a perfect victim in circumstances that were quite obvious to most in order for justice to experience what appears to be a resurrection.”

"This is a huge victory, not only for the family of Botham Jean, but this is a victory for black people in America," said Jean family attorney Lee Merritt. "It's a signal that the tide is going to change here. Police officers are going to be held accountable for their actions, and we believe that will begin to change policing culture around the world."

“Although we got a murder conviction, their lives will never be the same,” said Jean family attorney Daryl K. Washington. 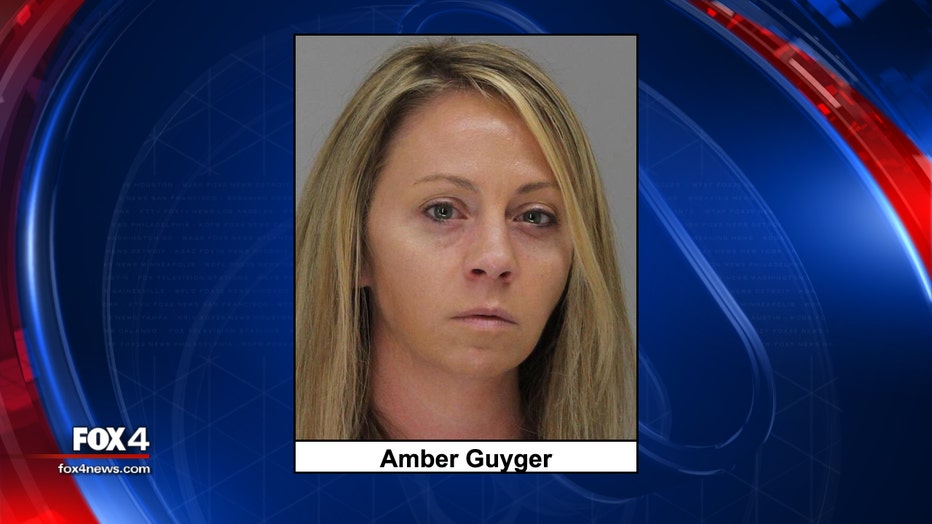 Guyger’s attorneys had hoped jurors would follow down the path they laid using Castle Doctrine, self-defense and mistake of fact to acquit Guyger. It did not happen.

“This verdict is exactly what we were looking for,” said Sammie Berry, Botham’s pastor.

Allison Jean, Botham’s mother, was the first witness in the punishment phase of this trial. She told his life story to this jury and the impact of the loss.

The attorneys for Botham Jean were pleased and seemed surprised by the guilty verdict.

While police and EMS crews were on standby for possible protests, there were none.

Outside the courthouse steps, community activists and local faith leaders said they are pleased with the verdict. And while they await sentencing, they say their work demanding justice is far from over.

“The good news is justice today overruled a system that is broken,” Haynes said. “And until that system is fixed, you'll see these faith leaders serving as the conscience of this city.”

Guyger was taken into custody shortly after proceedings wrapped for the day. Her defense team remains under a gag order until it's all over.

The Dallas Police Association has declined to comment until the sentencing is complete.

During the punishment phase, prosecutors showed racially charged text messages Guyger sent and received while working a Dallas MLK Day parade, along with a vulgar and threatening message she saved and commented about on her Pinterest.

In one text exchange, Guyger joked about the MLK parade where she was working security.

Someone texted Guyger, “When does this end lol.”

She replied, “When MLK is dead… oh wait…”

In another text exchange from two days before she shot Botham Jean, Guyger and her then police-partner Martin Rivera talked about the race of some officers Rivera was working with.

“Damn I was at this area with 5 different black officers!” Rivera texted Guyger. “Not racist but damn.”

Guyger replied,” Not racist but just have a different way of working and it shows.”

Phone evidence shows the texts were deleted from Guyger’s phone after the shooting.

During the start of sentencing, prosecutors launched a new attack on her character with a look at some of her texts and social media posts.

Rivera is the officer Guyger admitted to having an affair with and was sexting with the night she shot Jean.

Jurors then saw posts she liked on Pinterest. One said, “I’m already dressed for your funeral.” She commented on that post, “Yeh I got meh a gun a shovel and gloves if I were u back da f*** up and get out of meh fu***ng ass.”

There were two more Pinterest posts to her “love to laugh” and “quotes and inspiration” boards. One had a minion that says, “No one ever thanks me for having the patience not to kill them.” Another post said, “Kill first, die last.”

Jurors also heard about a time a month before the shooting when a handcuffed prisoner escaped from her. Her former sergeant testifying that he referred her to internal affairs because she did not report it to her supervisor.

The state also showed that she failed her first polygraph when applying to be a Dallas police officer because she admitted to smoking weed before.

Prosecutors hoping to introduce other facts about Guyger as they ask this jury to consider giving her more time, including history issues and items from her social media life. Her attorneys will try to mitigate that and ask this jury for leniency and mercy in sentencing.

Guyger is spending Tuesday night in jail. Testimony in the sentencing phase continues Wednesday at 9:30 a.m.

Guyger faces a sentence of five to 99 years. She is not eligible for probation.

Civil rights activists are calling the verdict a victory for African Americans and Hispanics around the nation and a sign that a cultural change is underway.

While the jury had the ability to acquit Guyger based on her incorrect belief that an intruder was in her apartment, they decided in the end that her logic wasn’t reasonable.

Civil rights activists are calling the verdict the win they've been waiting for.

Civil rights attorney Benjamin Crump admitted he was not expecting a murder conviction and not so quickly.

“A lot of commentators said there would be no murder conviction,” he said.

For Crump, the trial fits the same category as other high profile cases involving the deaths of black men, women and teenagers.

“This verdict is for Trayvon Martin, Michael Brown and Sandra Bland,” he said.

Stephanie Ola is a criminal defense attorney who has been closely following the case. She says the state had a substantial burden to prove its case beyond a reasonable doubt.

“The jury was able to consider some very favorable language,” Ola said.

That included the Castle Doctrine, which allows a person to use lethal force in self-defense at home. It was reinforced by the argument that Guyger truly believed she was in her own apartment.

Ola says the only outcome that would have surprised is manslaughter.

“Manslaughter is when you engage in conduct you know is dangerous and a person dies,” she said. “An example is shot in the dark. If she shot a warning or not knowing what she was shooting at, that would more closely resemble a manslaughter case.”

Ola says since the judge did allow the jury to consider the Castle Doctrine and mistake of fact, Guyger will have less of a case for an appeal.

Legal analyst George Miler is surprised by how quickly the jury came to a guilty verdict. He weighs in on the latest in the Amber Guyger trial.