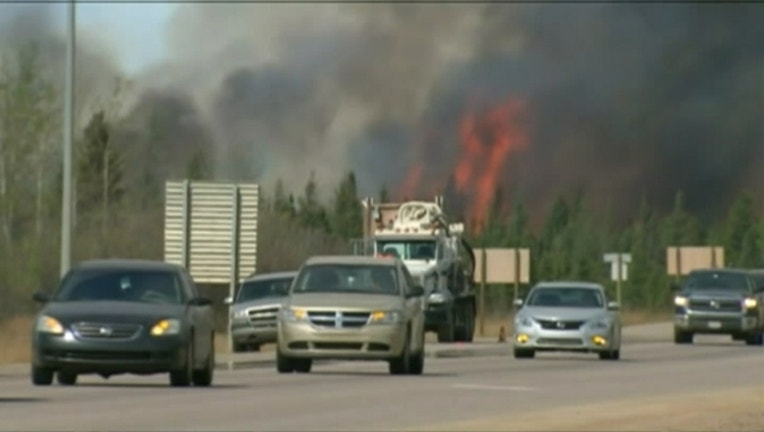 FORT MCMURRAY, Alberta (AP) — Canadian officials said Tuesday they are taking a second look at their plan to allow people to return home to Fort McMurray after a raging wildfire spread north toward oil sands plants.

Alberta Premier Rachel Notley told a news conference in Edmonton Tuesday that the fire overnight destroyed a 665-room work camp north of the city and two other camps are threatened. About 8,000 workers at oil camps north of Fort McMurray were ordered to evacuate late Monday.

Notley hopes to announce within the week when evacuees from Fort McMurray can return. About 80,000 Fort McMurray residents were forced to evacuate nearly two weeks ago.

"Safety will be and must be our first and principle priority," Notley said.

"When you start turning on a switch ... in a city of 90,000 people, sometimes stuff happens," Notley said. "What those two incidents last night demonstrated to us is that's the right way to go, that we need to make sure we've got everything cued up before people come back in because we want to make sure it's safe."

In recent days, oil sands workers were moved back up north to begin ramping up production again. But now the evacuation zone, stretching about 30 miles (50 kilometers) north of Fort McMurray to just south of Fort MacKay, included the major Syncrude and Suncor facilities, along with several smaller operations.

Notley said the focus of firefighting efforts Tuesday would be on protecting other the camps north of Fort McMurray.

"We expect fire growth in the area of many of these camps today," she said.

"Weather conditions will make this work extremely challenging. Westerly winds will push the fire closer to Suncor and Syncrude, but we expect very high resiliency with both of those facilities."

The wildfire has grown to about 1,350 square miles (3,550 square kilometers). That includes areas already burned and currently burning.

About 2,400 structures were destroyed in Fort McMurray, but 90 percent of the city remains intact, including essential infrastructure like the hospital, water treatment plant and the airport.

Suncor, Canada's largest oil company, said in news release that it had "started a staged and orderly shutdown of our base plant operations" and that personnel were being transported to work camps further north.

It stressed there has been no damage to Suncor infrastructure.

"Suncor has enhanced fire mitigation and protection around all of its facilities," said the release. "When it is safe to do so, we will continue implementing our restart plans."

High winds and higher temperatures have spurred the quickly spreading wildfire as tinder-dry conditions persist in the region.