After getting magnifying glass for Christmas, McKinney boy catches his front yard on fire

A child's Christmas gift is part of what set his family's front yard on fire in McKinney.

MCKINNEY, Texas - A child's Christmas gift is part of what set his family's front yard on fire in McKinney.

The boy's parents thought their son was going to use a magnifying glass for reading, but instead, he wanted to try and spark things on fire.

The 12-year-old said he was trying to use his magnifying glass to light newspaper on fire.

When it actually happened, the newspaper fire spread to the grass, sending the front yard into flames and smoke within minutes.

"Cayden asked for a magnifying glass for Christmas,” his mother, Nissa-Lynn Parson, said in a video posted to Facebook. “We thought, ‘Oh, he wants to magnify something.’ No, he wanted to see if he can make fire with it, and they did."

The Parson family didn't expect their son’s Christmas gift to help start a fire in the front yard of their McKinney home.

"Make sure you know what your kids want and what they're going to do with their presents,” Nissa-Lynn jokingly said.

"I just wanted to start a little fire," her son, Cayden, said. 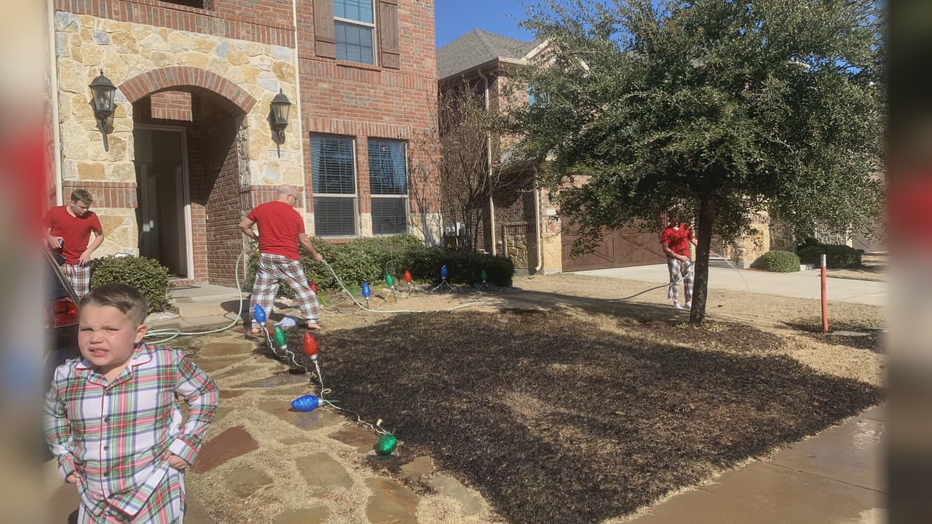 "And Christmas morning comes along and we're opening presents and stuff, and he opens the magnifying glass and goes, 'Yay, magnifying glass,’ The other son in the background, 'Yay, now we can light stuff on fire.' And we're like, oh dear,’” Cayden’s father, Justin Parson, said.

It was a sunny Christmas Day, and the kids thought it would be fun to angle the magnifying glass toward a bit of newspaper on the porch.

"He came outside and he picked up the newspaper which had a little fire on it," Cayden said.

But it caught fire and Cayden's older brother, Ashton, didn't know what to do.

"The flame starts, so I picked up the newspaper and just kind of like throw it," Ashton said.

"We ran inside and started screaming," Cayden said.

There was a cloud of smoke within minutes.

"The smoke was getting like as high as the tree," Ashton recalled.

"And so we're all out here with pitchers of water, blankets smothering it, sprinklers turned on, hose turned on," Nissa-Lynn said.

She added that when her son asked for the gift, she didn't expect it to be a fire starter.

She said it won't be again.

"No burning, like, it is in house. I want it like for reading or words," Nissa-Lynn said.

And Cayden's mom said he now has chores to do.

"They will definitely have yard work to do once spring comes," she said.

The Parsons are grateful the fire didn't spread to the neighbor's home.

And since no one was hurt, they have a story they don’t mind telling.

Along with the lawn, the fire destroyed a portion of the family's Christmas lights.