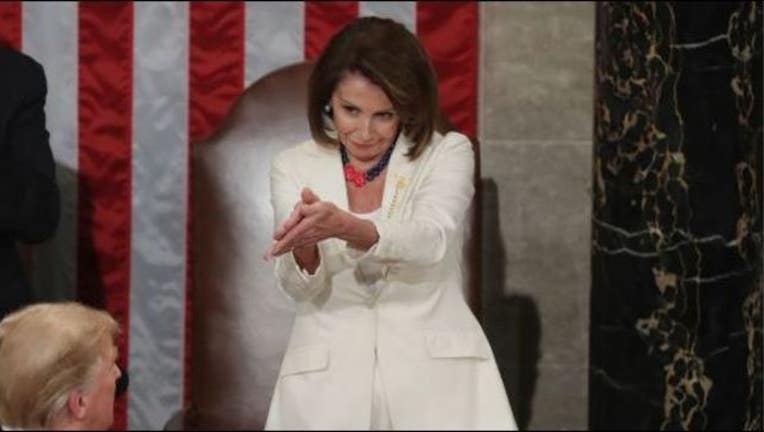 Speaker Nancy Pelosi claps as President Donald Trump is about to deliver the State of the Union address in the U.S. Capitol Building on February 5, 2019 in Washington, DC. (Photo by Chip Somodevilla/Getty Images)

Not Pelosi, who was the white-clad backdrop to every Trump word uttered during his first address to a joint session of Congress under divided government. With a smirk and an eye-roll , she set the tone for the new lawmakers who flipped the House from Republican control and elected her to lead them.

Postponed a week, the evening began without the customary opening of the speaker pounding the gavel, calling the chamber to order and presenting the president. Pelosi stood at the lectern behind Trump, gavel on the desk in front of her, apparently ready to perform the task as her Republican predecessor, Paul Ryan, had done before. But instead of allowing the introduction, Trump began delivering his speech. Pelosi, second in line to the presidency, sat.

Had she been offended, asked Rep. Eliot Engel, D-N.Y. in a Wednesday meeting?

"Who really cares," she replied, according to an aide in the room granted anonymity to discuss the private session of House Democrats. "I do want to applaud our entire caucus for the decorum. I thought you were very, very respectful of the office that he holds, respectful of the position that we have."

But not necessarily the man who occupies that office, a distinction Pelosi has suggested throughout Trump's presidency.

A year ago, she privately counseled Democrats to stay out of the way of Trump being "his slobbering self."

In the Oval Office in December, she maintained a respectful stance but warned Trump: "Don't characterize the strength that I bring." And afterward in another private meeting, Pelosi said Trump's demand for a southern border wall is a "manhood thing" - a comment immediately leaked to the media.

Then there was Pelosi's invitation to deliver the speech, her suggestion that he postpone it because of the shutdown, and her formal dis-invitation. When Trump capitulated to a deal that reopened the government until Feb. 15, Pelosi re-issued the invitation to the House chamber, her control of the event established.

Pelosi set the tone even before Trump spoke. When he arrived on the dais, she looked the president in the eye and applauded, pointing her hands at him even as she made them clap. As soon as he looked away, she did, too - and smirked.

"Oh yes that clap took me back to the teen years," tweeted Pelosi's daughter, Christine. "She knows. And she knows that you know. And frankly she's disappointed that you thought this would work. But here's a clap."

The moment signaled Pelosi's example to the Democrats she leads and who helped flip the House from Republican control. it came after she forced him to agree Jan. 25 to reopen the government with zero dollars for his border wall. Throughout the address, she threw her special brand of shade at Trump - an eye roll here, a chuckle there - even as she raised a hand to shush outbursts of groaning among the Democrats who flipped the House from Republican control.

At one point, when Trump saluted the record number of women serving in Congress, Pelosi stood and gestured to the sea of new lawmakers dressed in white on the Democratic side of the aisle. They leapt to their feet, pointed to each other and high-fived. Pelosi stood and reached out with both hands to acknowledge them.

When he declared that the "state of our union is strong," she shook her head with a tight smile and stayed seated. Republicans jumped to their feet and chanted, "U-S-A! U-S-A!"

But when Trump posited that the nation's "economic miracle" can only be interrupted by "foolish wars, politics or ridiculous partisan investigations," she rolled her eyes. A camera zoomed in on House intelligence Committee Chairman Adam Schiff, who this week said he would do everything possible to make sure special counsel Robert Mueller's investigation into Russian ties to Trump's 2016 campaign is made public. Schiff smiled.

"If there is going to be peace and legislation there cannot be war and investigation," Trump said.

Democrats on the floor and in the gallery groaned before Trump had finished the sentence.

Pelosi held up a hand below shoulder level and threw a glance in their direction to quiet down.