7 Patriot Front members from Texas among those planning to riot in Idaho, police say

Police arrested the members of a white supremacist group found in a U-Haul near a gay pride event in Idaho. Seven are from Texas, including the group's 23-year-old founder.

Seven Texans were among those arrested near a northern Idaho pride event in a resort town about 30 miles east of Spokane, Washington.

That includes the group’s 23-year-old leader and founder, Thomas Rousseau, who attended Coppell High School and lives in Grapevine. 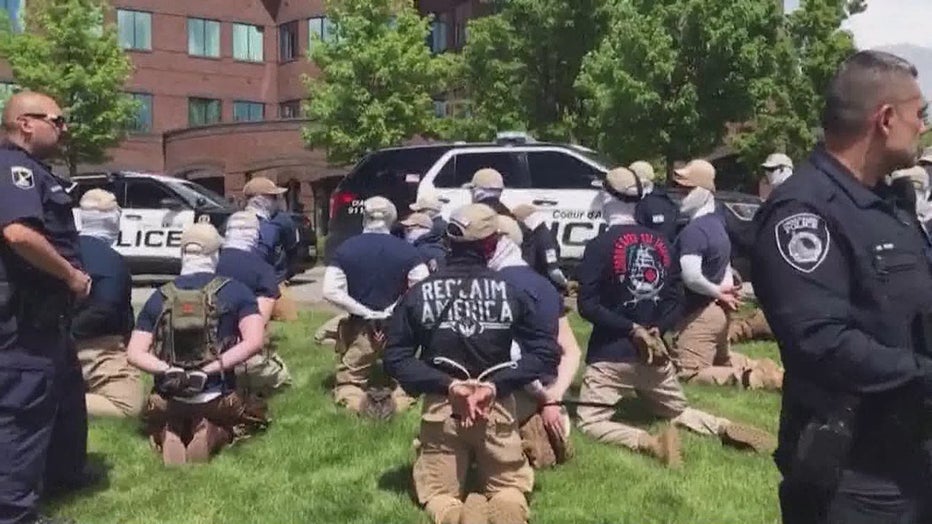 The Anti-Defamation League said he started Patriot Front after the deadly Unite the Right rally in Charlottesville, Virginia.

It defines Patriot Front as a white supremacist group that promotes hatw of people from other countries, people of color, antisemitism, and fascism at in-person demonstrations and with online propaganda.

Police said some of the men were wearing patches and logos that identified them as members of the group.

A vigilant bystander tipped off police.

"We received a telephone call from a concerned citizen who reported that approximately 20 people jumped into a U-Haul wearing masks. That had shields and looked like a quote little army," said Chief Lee White with the Coeur D’Alene Police Department. "Units began to go into the area, and we made a traffic stop almost exactly 10 minutes later. At that point, 31 people were detained. They were all wearing similar attire. They had shields, shin guards."

Police said the men also had at least one smoke grenade.

Each of the 31 men from 11 states faces a misdemeanor charge of conspiracy to riot.

Police said there was evidence to support that the group planned to riot in several locations.

An attorney for one of the men said the group did not have a history of violence and sees the case as a possible free speech issue.

Members of the group are scheduled to appear in court Monday.