Sacramento police are looking for multiple gunmen after a deadly shooting over the weekend.

SACRAMENTO, Calif (AP) - Six people were killed and 12 injured before dawn Sunday in Sacramento when multiple shooters fired amid crowds as bars and nightclubs emptied for the night in the second mass shooting in five weeks in California’s capital city, the police chief said.

The suspects were still at large and authorities said they had recovered at least firearm and were reviewing video footage posted to social media that showed what appeared to be an altercation before the gunfire erupted.

Detectives were trying to determine the sequence of events before the shooting and Eaton said they "don’t know if that fight actually lead to the shooting."

A police camera captured part of the shooting, Lester said, and investigators have located hundreds of pieces of evidence. A stolen handgun was found at the scene that Lester described as "really complex and complicated." 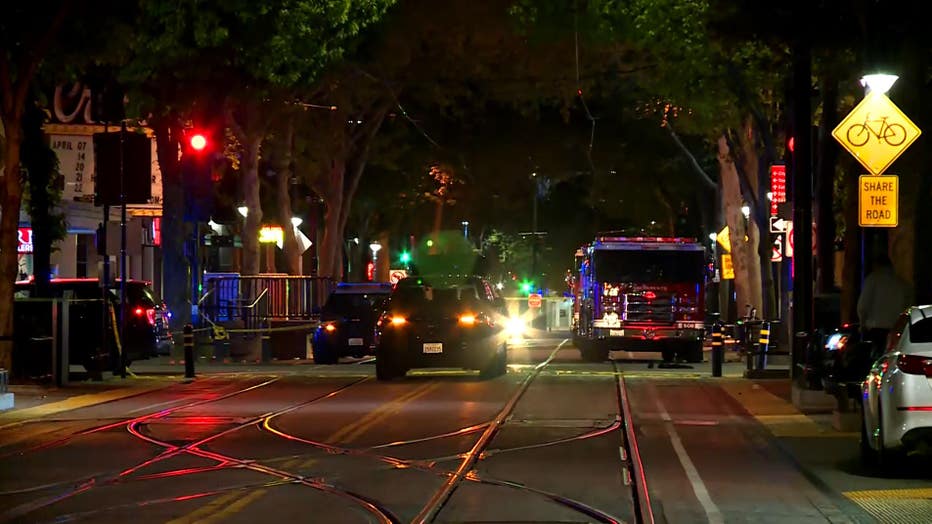 Downtown Sacramento after police reported six had been killed and nine others hurt in a shooting. Source: KOVR

The crime scene stretched across multiple city blocks, with dozens of blue and yellow evidence markers dotting the pavement. Several of those who were wounded battled life-threatening gunshot injuries in hospitals.

Kelsey Schar was staying on the fourth floor of Citizen Hotel when she said she heard gunshots and saw flashes in the dark. She walked to the window and "saw a guy running and just shooting," Schar told The Associated Press in an interview.

Her friend, Madalyn Woodard, said she saw a crowd in the street scatter amid the gunfire and a girl who appeared to have been shot in the arm laying on the ground. Security guards from a nearby nightclub rushed to help the girl with what looked like napkins to try to stanch the bleeding.

A video posted on Twitter showed people running through the street amid the sounds of rapid gunfire in the city of about 525,000 located 75 miles (120 kilometers) from San Francisco.

The area where the violence occurred on the outskirts of the city’s main entertainment district is packed with restaurants and bars. Nightclubs close at 2 a.m. and it’s normal for streets to be full of people at that hour.

The district is anchored by the Golden One Center that attracts big-name concerts and is home to the NBA’s Sacramento Kings. City officials have invested heavily in the area to promote development in the area.

"This morning our city has a broken heart," Sacramento Mayor Darrell Steinberg said. "We don’t know all the facts but we know there were mass casualties in a very short amount of time."

Officers were patrolling the area near the shooting site two blocks from the Capitol at about 2 a.m. when they heard gunfire and rushed to the scene, Lester told reporters. They found a large crowd gathered and six people dead in the street.

Twelve other people were also shot and wounded in the melee and at least four of them suffered critical injuries, said officials. Police urged witnesses or anyone with recordings of the shooting to contact police.

"We’re asking for the public’s help in helping us to identify the suspects in this," Lester said.

Pop duo Aly & AJ performed Saturday at Sacramento’s Crest Theatre and their tour bus was caught in the gunfire, the musicians said on Twitter. No one in their touring group was hurt, the tweet said.

Sunday’s violence was the third time in the U.S. this year that at least six people have been killed in a mass shooting, according to a database compiled by The Associated Press, USA Today and Northeastern University. And it was the second mass shooting in Sacramento in the last five weeks.

On Feb. 28, a father killed his three daughters, a chaperone and himself in a church during a weekly supervised visitation. David Mora, 39, was armed with a homemade semiautomatic rifle-style weapon, even though he was under a restraining order that prohibited him from possessing a firearm.

Councilmember Katie Valenzuela, who represents the area where the shooting happened, said she’s fielded phone calls reporting many violent incidents in her district during her 15 months in office.

Valenzuela cried at a news conference as she told reporters that the latest phone call woke her up at 2:30 a.m. Sunday with details about the latest tragedy.

"I’m heartbroken and I’m outraged," she said. "Our community deserves better than this."

The city’s downtown development effort was working until the pandemic hit and forced many businesses to close, according to Grant Gorman, a bartender who lives near the place the shooting happened.

"Just when we were reaching some semblance of it being a bustling downtown area that was safe and we had a bunch of open businesses to go to, the pandemic hit it and just crushed it," Gorman said.

Steinberg, the mayor, said in recent years it "has been a very difficult time in downtown Sacramento and Sacramento as a whole."

He added that the shooting "gives pause to our entire community" but urged people to continue visiting the area despite the recent violence.

California Gov. Gavin Newsom said in a statement that his administration was working closely with law enforcement officials.

"What we do know at this point is that another mass casualty shooting has occurred, leaving families with lost loved ones, multiple individuals injured and a community in grief," he said.

Kay Harris, 32, told AP she was asleep when one of her family members called to say they thought her brother Sergio Harris had been killed. She said she thought he had been at the London nightclub, which is near the shooting.

Harris said she has been to the club a few times and described it as a place for "the younger crowd." She spent the morning circling the block waiting for news.

"Very much so a senseless, violent act," she said.

Pamela Harris, Sergio Harris’ mother, told The Sacramento Bee the family has not heard from him yet.

"We just want to know what happened to him," Pamela Harris told the newspaper. "Not knowing anything is just hard to face."

Berry Accius, a community activist, said he came to the scene shortly after the shooting happened.

"The first thing I saw was like victims. I saw a young girl with a whole bunch of blood in her body, a girl taking off glass from her, a young girl screaming saying, ‘They killed my sister.’ A mother running up, ‘Where’s my son, has my son been shot?’" he said.