Kentucky was battered Saturday by four tornadoes -- including one with a 200-mile path of destruction. The day before, severe weather that swept through Illinois left six dead.

MAYFIELD, Ky. - Deputies and state troopers in Kentucky arrested five people on Friday who are accused of stealing property and cars from the victims of last week’s deadly tornado outbreak.

According to the Graves County Sheriff's Office, deputies learned of a group of people rummaging through personal property and towing vehicles in the area of Cardinal and Pritchett Road, which was hit particularly hard by the tornado. Many people in the area died in the storm.

Deputies from Graves and Calloway Counties along with troopers flocked to the area where they found the group in action, authorities said. Investigators said the group attempted to leave the area with several damaged cars in tow.

Authorities pulled them over and discovered household goods, new shoes, muddy change, copper wiring and other items that belonged to tornado victims, deputies said. Investigators said the vehicles in tow also belonged to storm victims who are either displaced, hospitalized or deceased.

RELATED: How to help tornado victims in Kentucky, other states

Deputies said some of the suspects contradicted each other when giving statements about having permission from the owners of the property. And the sheriff’s office said it later contacted the homeowners who further disproved those claims. 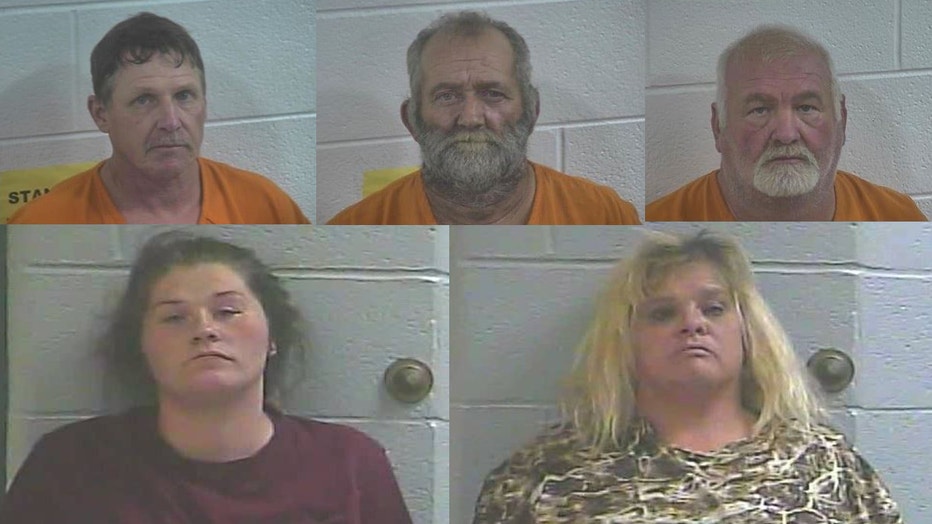 Stowe faces charges of theft of automobile and theft of motor vehicle registration plate. Investigators said the car Stowe drove sported a stolen license plate from Tennessee. They also claim he had $120,000 in his possession.

The remaining four each face a charge of theft by unlawful taking automobiles.

RELATED: Tornado killed 7 children on a single street in Kentucky

Morris also faces charges for operating on a suspended license, theft by unlawful taking personal property and possession of meth. Deputies said they found syringes containing meth in the vehicles she was operating and in her purse.

Investigators said Morris possessed copper wiring and a brand new pair of women’s boots that had been stolen from a victim’s home.

Moore also faces a meth charge along with a count of tampering with physical evidence. Deputies said Moore hid meth in a body cavity.