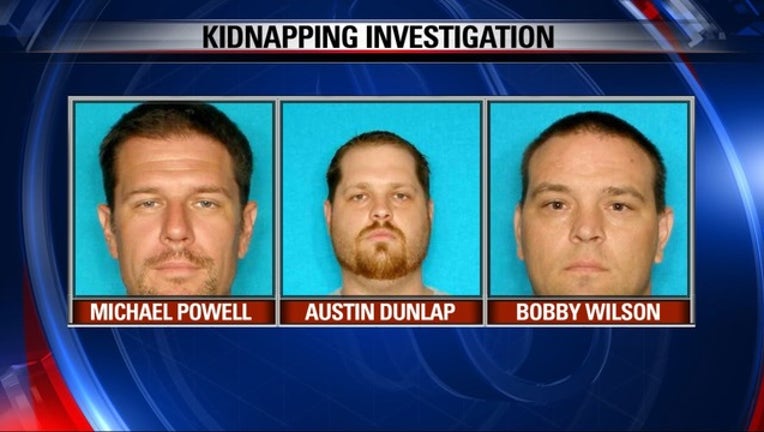 BLUE MOUND, Texas - Police in Tarrant County have arrested two of the three men who were wanted in connection with a bizarre kidnapping.

Investigators in Blue Mound, north of Fort Worth, said Michael Powell, Austin Dunlap and Bobby Wilson tied a man’s hands with rope and beat him up.

The alleged incident happened on Nov. 6. When the victim tried to escape, the suspects allegedly tried to run him over with their white sedan.

Blue Mound police said the victim eventually got away, ran into a nearby business and called for help.

Dunlap was arrested Thursday at his sister’s house in Knoxville, Tenn. Police said they got several tips about where he was staying.

Wilson was taken into custody late Thursday night following a police chase that ended in Allen.

Powell is still at large and should be considered armed and very dangerous, police said. He allegedly removed his ankle monitor on Nov. 8 and now has an active parole violation in addition to the warrant for aggravated kidnapping.

Police have not released details on the motive for the crime.