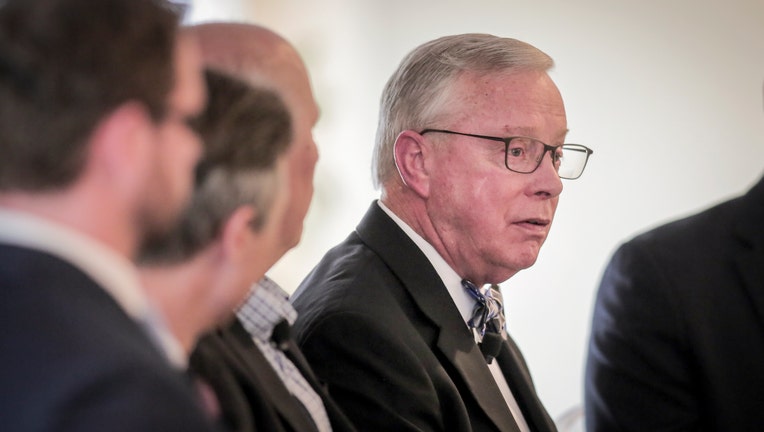 A crowd of 23 candidates — including 11 Republicans and 10 Democrats — has filed for the May 1 special election to fill the seat of the late U.S. Rep. Ron Wright, R-Arlington, according to the secretary of state's office.

The filing deadline was 5 p.m. Wednesday. The race also attracted one independent and one Libertarian.

The GOP field saw a last-minute surprise. With less than an hour until the deadline, Dan Rodimer, the former professional wrestler who ran as a Republican for Congress last year in Nevada, arrived at the secretary of state's office in Austin to file for the seat.

"We need fighters in Texas, and that’s what I’m coming here for," Rodimer told The Texas Tribune. "I’m moving back to Texas. I have six children and I want them to be raised in a constitutional-friendly state."

Some of the other candidates had already announced their campaigns, most notably Wright's widow, longtime GOP activist Susan Wright. Other prominent Republican contenders include state Rep. Jake Ellzey of Waxahachie and Brian Harrison, the former chief of staff at the U.S. Department of Health and Human Services under President Donald Trump.

Ron Wright died last month after being hospitalized with COVID-19. He had also been battling lung cancer.

His death created a vacancy in the Republican-leaning 6th Congressional District, which spreads southeast from the Dallas-Fort Worth area to rural Ellis and Navarro counties.

The district has been getting increasingly competitive in statewide results, with Trump carrying it by only 3 percentage points last year. However, Ron Wright won it by more healthy margins when he was first elected in 2018 and then reelected in 2020. National Democrats targeted the seat that year. but it remains to be seen how involved they plan to be in the special election.

"23 candidates join the race to replace late U.S. Rep. Ron Wright" was first published at https://www.texastribune.org/2021/03/03/ron-wright-special-election-filing/ by The Texas Tribune. The Texas Tribune is proud to celebrate 10 years of exceptional journalism for an exceptional state.