While plans were underway to open the fair with reduced capacity and new safety protocols, the State Fair board decided opening would put too many people at risk.

The State Fair of Texas has been canceled due to the ongoing coronavirus pandemic, officials announced Tuesday.

"With a heavy heart, we are announcing that the State Fair of Texas will not open for the 2020 season. We believe the spirit of the Lone Star state lies in every Texan’s ability to care and look out for their neighbor and it is with this in mind, we have decided to keep our guests, staff, and partners safe and healthy during these uncertain time," the State Fair of Texas said in a statement.

Board Chair Gina Norris said that with the number of COVID-19 cases continuing to rise, there's no feasible way to put proper precautions in place while maintaining the “fair environment.”

“This was an extremely tough decision. The health and safety of all involved has remained our top priority throughout the decision-making process,” Norris said. “While we cannot predict what the COVID-19 pandemic will look like in September, the recent surge in positive cases is troubling for all of North Texas. The safest and most responsible decision we could make for all involved at this point in our 134-year history is to take a hiatus for the 2020 season.”

While plans were underway to open the fair with reduced capacity and new safety protocols, the State Fair board decided opening would put too many people at risk.

Dallas Mayor Eric Johnson agreed with the choice to not have the fair.

“The State Fair made the safe and responsible decision. COVID-19’s spread is rampant in our community, and public health must come first,” Johnson said.

The State Fair of Texas has been canceled due to the ongoing coronavirus pandemic, officials announced Tuesday.

If football is played this fall, the schools featured in the two State Fair games will be allowed to play in the Cotton Bowl as scheduled.

“We understand and respect the decision made by the State Fair of Texas and acknowledge that it was an extremely difficult one," said University of Oklahoma Athletic Director Joe Castiglione. "Our hope remains that we can play the OU-Texas game at the Cotton Bowl, but obviously every aspect of our season requires constant monitoring and planning."

“Though we certainly respect and understand the decision of the folks in Dallas on their cancellation of this year’s State Fair of Texas, we fully anticipate that our annual Red River Showdown with Oklahoma will be played in the Cotton Brown and are continuing to prepare for that,” added University of Texas Athletic Director Chris Del Conte.

Tuesday's decision served a huge blow to vendors who rely on the money made during those three weeks in the fall when hundreds of thousands of people come to Fair Park.

Fletcher’s Corny Dogs sells more than half a million of its dogs a year at just the fair alone. That means Fletcher’s family's company will miss out on millions in revenue.

“It’s also the livelihood. Hundreds of vendors and thousands of people that the State Fair of Texas employs. So it’s a huge financial hit,” she said. “And not to make it about money, but money is how we put food on the table. So I am sure it is devastating to all the other vendors as well.” 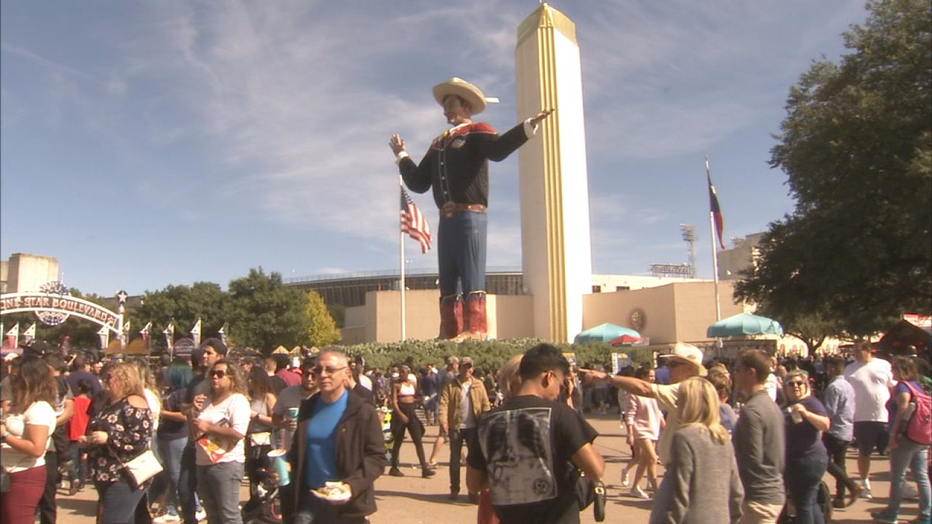 Fletcher says her family will focus on sales from the Fletcher's food trucks.

Liz Knight has gone to the fair every year since she was in 4th grade. She understands the cancelation, but feels for the 7,000 seasonal employees who will be out of jobs.

"Love the food, Texas product building, butter sculpture,” she said. “I like the funnel cake lady who has been here forever,” Knight said.

This will be the first time since World War II that the State Fair of Texas has not opened. It was also canceled during World War I and from 1936-1937 for the Pan American Exposition at Fair Park.

Those who already purchased tickets can get a refund online. It’s also working on ways to allow students to still compete in the livestock and arts competitions, which have scholarship implications.

Big Tex shared some big news -- there will not be a State Fair of Texas this season. Karissa Condoianis joined Good Day to talk about the decision to cancel.