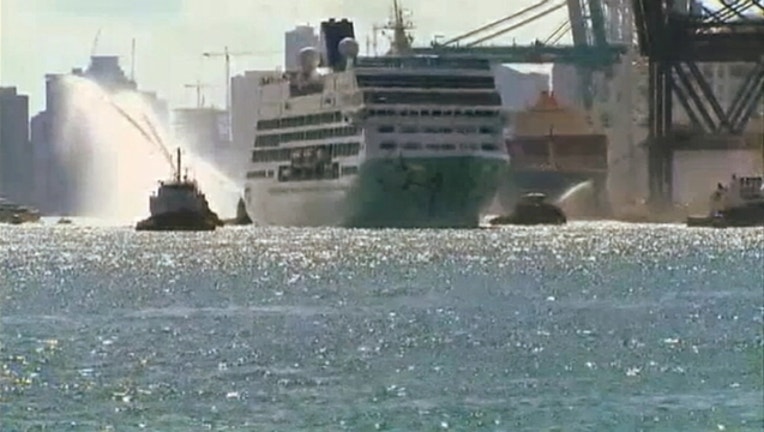 MIAMI (AP) — Passengers have set sail from Miami on a historic cruise to Cuba, the first in decades to depart from a U.S. seaport for the communist island nation.

Carnival Corp.'s 704-passenger Adonia left port Sunday at 4:24 p.m., bound for Havana. Carnival's Cuba cruises, operating under its Fathom brand, will also visit the ports of Cienfuegos and Santiago de Cuba on the seven-day outing. Several Cuba-born passengers, among hundreds of others, were aboard, it said.

The cruise comes after Cuba loosened its policy banning Cuban-born people from arriving to the country by sea, a rule that threatened to stop the cruises from happening.

Restarting the cruises was an important element of a bid by President Barack Obama's administration's to increase tourism to Cuba after the Dec. 17, 2014, decision to restore diplomatic relations and move toward normalization.

When it first announced the cruises, Carnival said it would bar Cuban-born passengers due to the government's policy. But the Cuban-American community in Miami complained and filed a discrimination lawsuit in response. After that, the company said it would only sail to Cuba if the policy changed, which Cuba did on April 22.

Carnival said the Adonia will cruise every other week from Miami to Cuba. Bookings will start at $1,800 per person and feature an array of cultural and educational activities, including Spanish lessons, Carnival's website says.

Seventy-three-year-old passenger Rick Schneider told The Sun-Sentinel (http://bit.ly/1SH4Zi1) he had waited decades for the chance to make the journey. He bought a Cuban flag for the occasion, which he waved from the deck at protesters who opposed the cruises.

He said he once passed up taking a ferry trip to Cuba in 1957, adding "the time is now."

The cruise is among the many changes in U.S.-Cuban relations since a thaw between the former Cold War foes began in late 2014. The thaw also led to a historic, two-day trip to Cuba in March by Obama, who met with Cuban counterpart Raul Castro and others.

The Cuban government says the shift in policy removes prohibitions enacted when Cuban exiles were launching attacks by sea after the first Cuban revolution.

On Sunday, Arnold Donald, Carnival's president and CEO, said the company worked and prepared to make the cruises a reality despite the challenges.

"Times of change often bring out emotions and clearly the histories here are very emotional for a number of people," Donald told reporters."

The Miami Herald (http://hrld.us/21ohkxc) reported that a boat carrying some activists protesting the trip to Cuba was nearby in Florida waters before the ship's departure Sunday. The report said the boat pulled away before the Adonia set sail with an expected Monday arrival in Havana.

Mary Olive Reinhart, a retired parks service ranger, told the paper that she and some friends from the Philadelphia area were drawn to the voyage by the adventure of it all.

The Fathom brand said on its website that the trip was authorized under current people-to-people travel guidelines of the U.S. government and would include meetings with artists, musicians, business owners and families — along with Cuban shore excursions to traditional sites.

"It's exciting to go places where we're forbidden. For me, I want to be at home in the world — the whole world," she added.