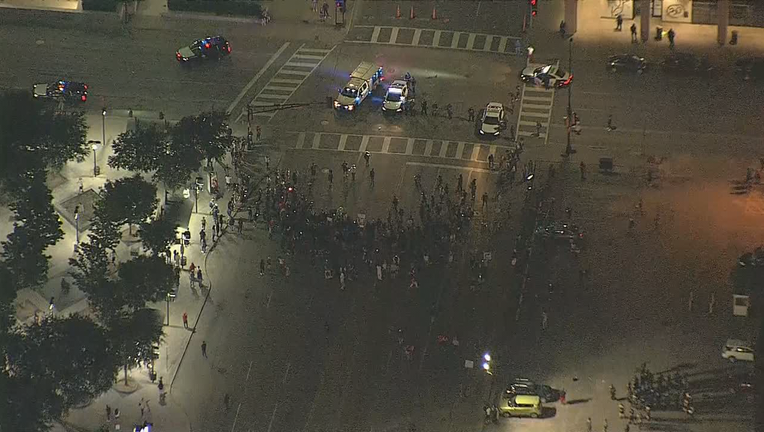 DALLAS - There were more than 100 arrests made Saturday as police were in Downtown Dallas trying to stop looters and vandals who were out after a protest over the death of George Floyd.

What again started as a peaceful protest Saturday, became tense about 4:30 p.m., when officers used tear gas and bean bags to clear the streets of protestors.

DART suspended its bus and rail service in Downtown Dallas Saturday night because of the unrest.

Then, after dark, some people began looting and vandalizing businesses.

A man who ran towards protesters with a machete was beaten in Downtown Dallas.

Police said he was trying to "protect his neighborhood," and confronted protestors while holding the machete.

He was assaulted and taken to an area hospital in stable condition. No further details were released.

Not far from Victory Park, vandals took over and damaged a grocery store.

Police said people tried to loot, but officers responded and stopped them.

Some nearby restaurants were also damaged, and a group of vandals looted the Whole Foods on McKinney Avenue, in Uptown.

Dallas PD then tweeted out, urging all downtown buildings, businesses, and properties to lock their doors and not let anyone in.