LOS ANGELES - There are plenty of reasons to watch the Super Bowl: the snacks, the halftime show, the football.

However, most can agree that the commercials are arguably the best part of the big game. And when it comes to Super Bowl ads, there are no shortage of memorable ones - like Apple's "1984" and pretty much every Budweiser commercial with a Clydesdale in it.

Here are 10 of our all-time favorites from the past few decades:

In the ad, former Pittsburgh Steelers defensive tackle "Mean" Joe Greene limps to the locker room after a game when a young fan offers him a bottle of his Coke. Greene declines it at first, but then accepts the drink and downs it in a single gulp. The boy starts slowly walking away when his hero says the now-famous line, "Hey kid, catch!"

The Apple ad features a dystopian-like future, as imagined in George Orwell's "1984." The scenes are intercut with shots of a woman running and carrying a sledgehammer. She bursts into the assembly hall and throws the sledgehammer at the screen, creating an explosion. A voice-over reads: "On January 24th, Apple Computer will introduce Macintosh. And you'll see why 1984 won't be like '1984.'"

The ad features two boys watching supermodel Cindy Crawford pull up in front of a vending machine to get a Pepsi. Rather than focus on Crawford and her sex appeal, the two kids marvel at the newly redesigned Pepsi can.

Playing off the rivalry between Michael Jordan and Larry Bird, the ad features the two NBA Hall-of-Famers battling it out for a Big Mac. Bird challenges him to an epic shooting contest that gets more and more elaborate, always ending with "nothing but net."

The commercial begins with a close-up of "Bud" croaking his name in a swamp. "Weis" and "Er" slowly join in, and they all croak in a random fashion for about 15 seconds. The camera begins to pull out and "Bud," Weis" and "Er" begin croaking in sequence to form the Budwiser name and reveal a neon sign.

The ad features a monkey dancing in an E-Trade shirt and two men tapping their feet to music in a garage. At the end, the tagline on screen reads: "Well, we just wasted $2,000,000. What are you doing with your money?"

The boss hires a linebacker who "gives out the pain" to fellow co-workers not following office policies. "Terrible" Terry Tate launches hard hits on those who are lazy or make mistakes in their job, yelling catchphrases like, "The pain train's comin,'" and "You kill the joe, you make some mo!'"

In the ad, a group of guys are playing tackle football. When one gets hit, it turns out to be Betty White. The guys refer to him as "Mike" and say he's playing like the former "Golden Girl." He eats a Snickers bar, which transforms him back into Mike." An announcer says at the end, "You're not you when you're hungry."

A young boy dressed like Darth Vader goes from room to room, trying to use "the Force" on various household items. His father drives up in a new Volkswagen Passat and the boy tries to apply his Vader energy on the car. Meanwhile, his father uses the car's remote keyless system to start the vehicle from inside the house, and the boy is adorably shocked.

In Budweiser's "Puppy Love" commercial, a 10-week old puppy and a Clydesdale friend refuse to be separated and become #BestBuds forever (pun intended) — as well as the puppy earning a place on the Clydesdale team. 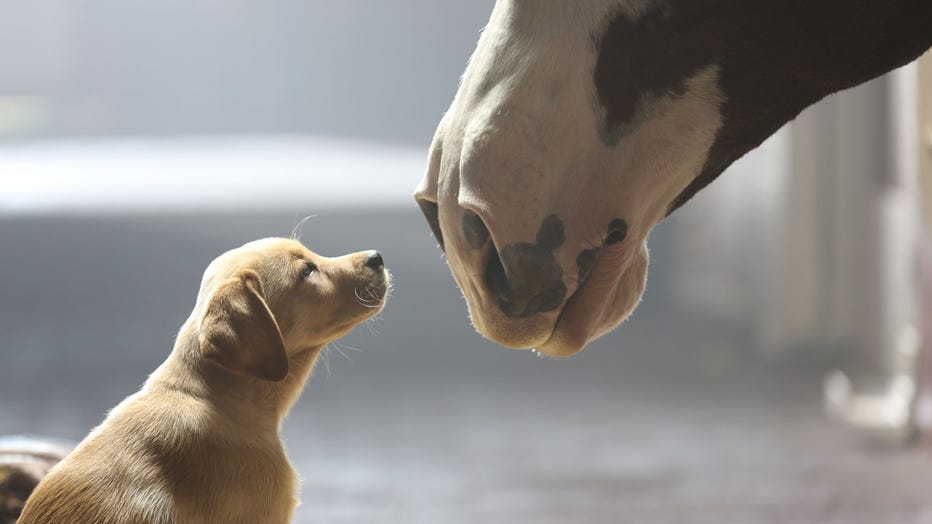 A 10-week old puppy and a Clydesdale are pictured in Budweiser’s “Puppy Love” commercial that aired during Super Bowl XLVIII. (Photo credit: Anheuser-Busch)