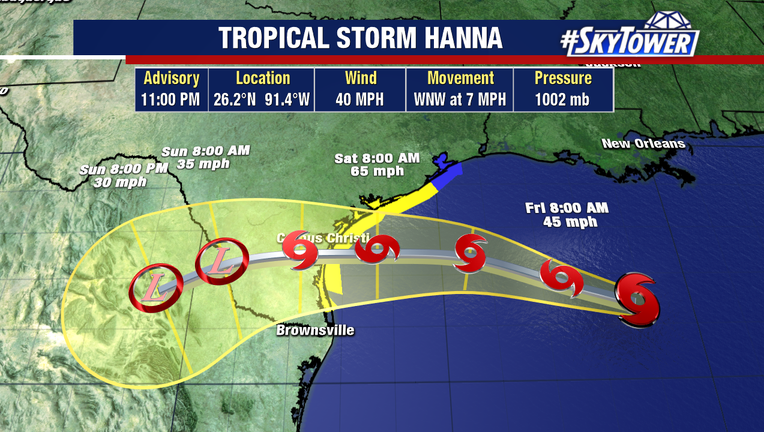 MIAMI, Fla. - A gulf depression strengthened into a tropical storm late Thursday, triggering watches and warnings along the southern coast of the continental United States.

Tropical Storm Hanna was the earliest eighth Atlantic named storm on record, breaking the previous record of Harvey in 2005. Hanna was located 385 miles (620 kilometers) east, southeast of Corpus Christi, Texas, according to the 10 p.m. CDT advisory from the National Hurricane Center.

The formation of Hanna came as Tropical Storm Gonzalo continued to move across the Atlantic about 730 miles (1,170 kilometers) east of the southern Windward Islands. Forecasters said Gonzalo had maximum sustained winds of 60 mph (95 kph).

A U.S. National Hurricane Center advisory said the storm was heading west at 14 mph (22 kph). Tropical-storm-force winds extended outward up to 25 miles (35 km) from the center.

Check myfoxhurricane.com for the latest storm tracks and data.

The Hurricane Center said that those in the Windward Islands should monitor the storm as it is expected to approach the islands late Friday and Saturday. As some strengthening is forecast, there is still a chance that Gonzalo could become a hurricane, but the storm is expected to weaken as it moves into the Caribbean Sea.

A hurricane watch has been issued for Barbados and St. Vincent and the Grenadines. A tropical storm watch is in effect for Tobago and Grenada.

When Gonzalo strengthened into a named storm Wednesday, it became the earliest named seventh tropical storm of the Atlantic hurricane season. The previous record was held by Tropical Storm Gert, which formed on July 24, 2005. So far this year, Cristobal, Danielle, Edouard and Fay also set records for being the earliest named Atlantic storms of their respective place in the alphabet.