Dan Henry has the latest forecast for Friday night 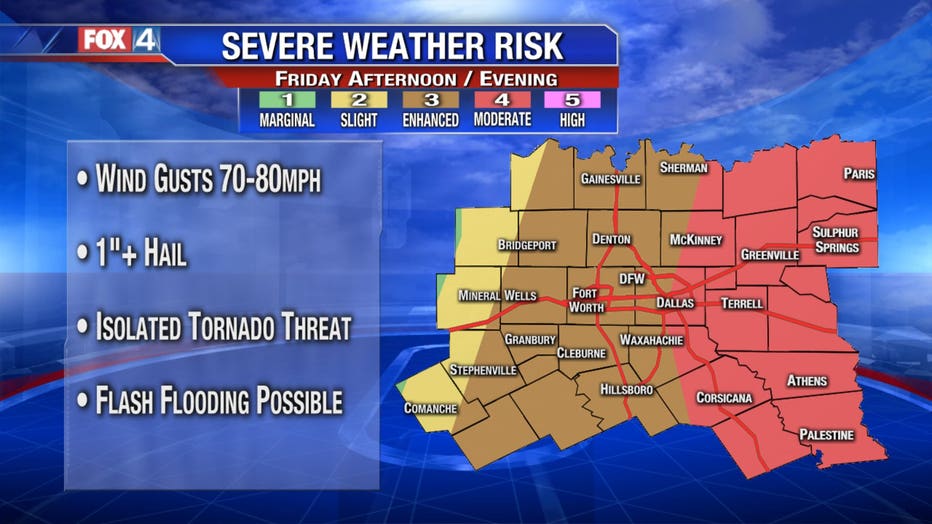 The Storm Prediction Center has shifted the Moderate Risk area closer to the metroplex, which is a four on a scale of five. Areas west of Dallas still remain under an Enhanced Risk of severe weather.

The majority of North Texas remains under a Tornado Watch until 9 p.m.

The line of severe thunderstorms continues moving eastward around 30 miles an hour. The biggest threats continue to be strong wind gusts up to 70-80 miles an hour, followed by 1.5-inch hail and a few tornados The likelihood of severe weather increases further into East Texas, where a Tornado Watch is in effect until 2 a.m. Saturday.

INTERACTIVE RADAR: Click here for the latest watches and warnings

The storms have produced several tornado warnings in Denton, Tarrant, Dallas and other counties. However, there have not been any immediate reports of damage or injuries.

Sirens have been going off across the Dallas-Fort Worth area as the line of storms still has the potential of producing strong winds, hail and tornadoes.

As the line of storms move east, the storms will gain strength over the Dallas-Fort Worth area between 4 p.m. to 8 p.m.  Eastern areas will be impacted by the storms likely between 6 p.m. to 11 p.m. 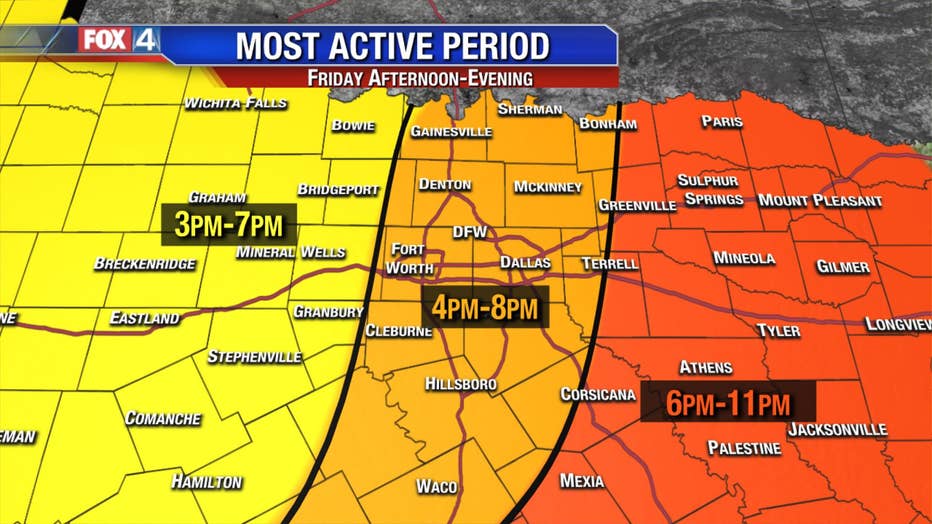 As the storms move overnight Friday, strong winds will cause temps to plummet into the 30s by Saturday morning with wind chills in the 20s.

Some lingering showers the first couple of hours Saturday could be mixed with some light snow for areas along the Red River. There may be some light accumulation in grassy areas and car tops, but nothing significant is expected, and all will be gone quickly since the ground will be too warm.

Skies will clear Saturday afternoon for the rest of the week, but the but temperatures will struggle and barely get back into the 40s. After a cold start Sunday near freezing, we'll have a normal day with partly sunny skies and temps in the mid-50s. The 60s return Monday through Wednesday of next week. 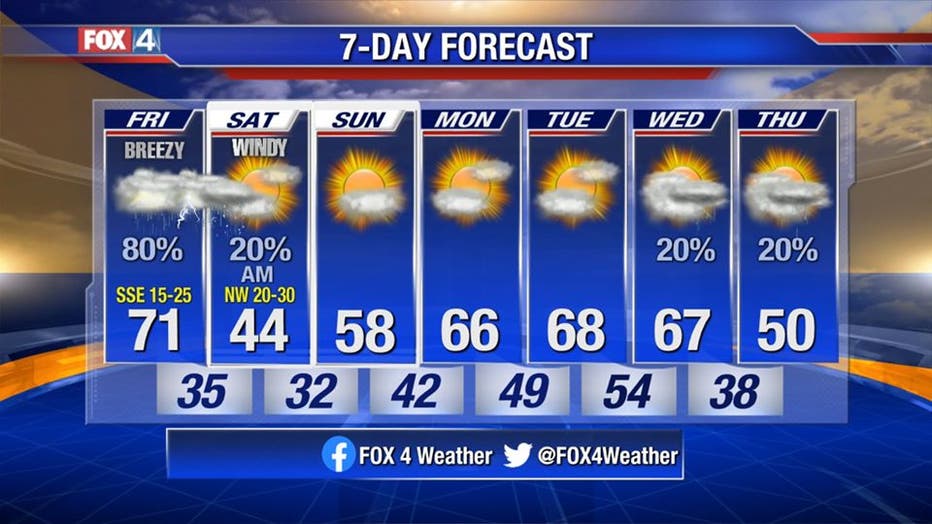 The Dallas Mavericks had an eye on the severe weather and warned fans to arrive early to try and beat it before Friday’s highly anticipated game with the Lakers.

Because of the weather threat, doors opened early at 6:30 p.m. for the game. It's the last regular season meeting between the two teams.

Fans who got in the arena earliest for the sold-out game were the luckiest. They dodged heavy rain that started falling around 7 p.m. Fortunately, it was only rain that hit Downtown Dallas.

Mavs fans were thankful they did not have to seek shelter inside the AAC during Friday night's severe weather.

In North Dallas, some residents in the damaged area from the October 2019 tornado had their own concerns.

Anxiety was high for Kerrie Wolfson as the threat of severe weather drew nearer. Her home near Orchid and Hillcrest was damaged by the EF-3 tornado that touched down.

“I just think I would lose my mind if that happened again,” she said. “We just got our windows this week, so I would be devastated to lose any other windows or any other part of my house.”