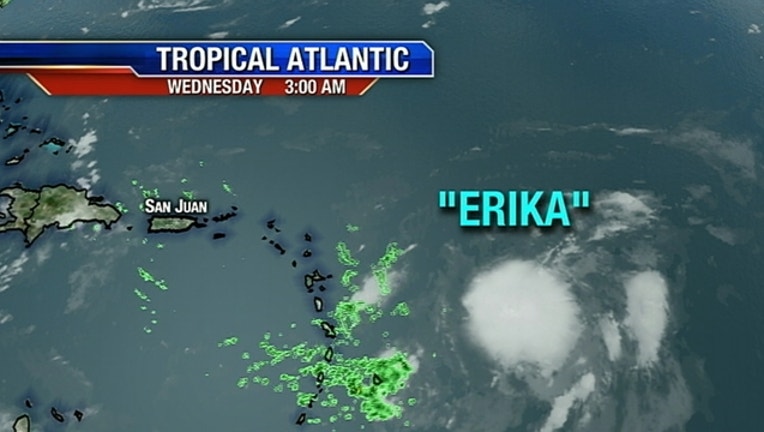 The storm was located about 285 miles (460 kilometers) east of Antigua and was moving west near 17 mph (28 kph). Maximum sustained winds increased Wednesday morning to near 45 mph (75 kph), but the storm was not forecast to gain strength over the next two days.

Erika was expected to move just north of Barbuda late Wednesday as it enters the Caribbean, said Philmore Mullin, director of Antigua and Barbuda's National Office of Disaster Services.

He said the twin-island nation could experience flash flooding given the extremely dry conditions caused by the worst drought to hit the Caribbean in recent years.

"This is a serious storm, and they need to make sure preparations are in place," he said.

The U.S. National Hurricane Center said Erika would move over or near parts of the Leeward Islands on Wednesday night and then near Puerto Rico and the Virgin Islands on Thursday.

Tropical storm warnings were issued for Puerto Rico, the U.S. and British Virgin Islands and the Leeward Islands. Erika was expected to dump between 3 to 5 inches (8 to 13 centimeters) of rain, and up to 8 inches (20 centimeters) in some areas.

Meanwhile in the Pacific, Tropical Storm Ignacio gained some strength. The storm's maximum sustained winds increased to nearly 60 mph (95 kph), and it was expected to strengthen to a hurricane by Thursday.