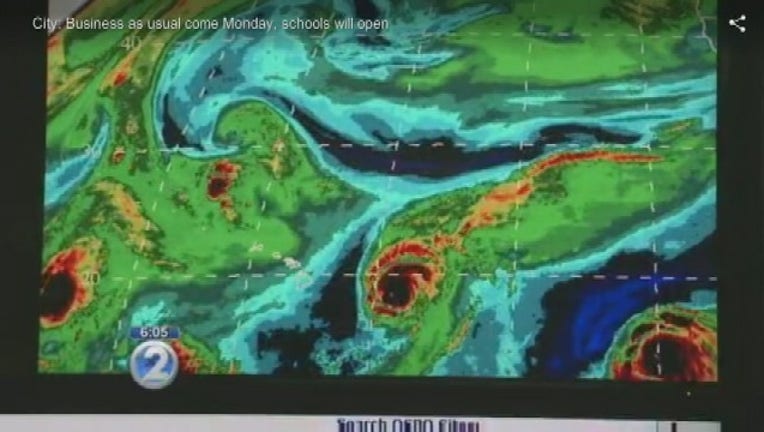 KAILUA-KONA, Hawaii (AP) — Greg Colden, a farmer on Hawaii's Big Island, said he is most worried about the damage that more rain and sustained winds could do to the area as Hurricane Ignacio passes by this week.

"I'm more worried about the rain. We've had over 10 inches in August, which is an anomaly for us. The trees are saturated already, and if we get some sustained winds, they could topple. That could cause quite a bit of damage," Colden said. He is one of the owners of Kona Natural Soap Co. in Holualoa, upslope of Kona Village on the west side of the island, and has 450 coffee trees and 1,250 cacao trees.

But he's not overly worried.

"We've gone through this so many times. Unless it whips around the island and we take a direct hit, we should be OK," Colden said.

Colden and other Hawaii residents were calmly awaiting Ignacio on Sunday as the Category 3 hurricane comes closer to the Big Island and Maui.

The islands had been under a tropical storm watch, but the National Weather Service discontinued that Sunday evening, with forecasts saying tropical storm force winds were no longer expected to reach the islands.

Several residents said they are treating the storm like business as usual.

Capt. Steve Turner, owner of Kohala Sail and Sea, runs sailing and snorkel tours from Kawaihae Harbor on northwest corner of Hawaii Island. He said he has not canceled any appointments.

"We've had some passengers call inquiring whether the tours are still on," he said. "Lately we've had these storms going all around us, and we haven't had much of an effect on this side (of the island). I'm not that worried."

The Central Pacific Hurricane Center reported Hurricane Ignacio was on a weakening trend as it moved northeast of Hawaii. Winds dropped from 130 mph to 115 mph and the hurricane was expected to become a tropical storm by Tuesday, said Anthony Reynes, a meteorologist with the center.

With the storm watch discontinued, the Weather Service said the main impact from Ignacio will be high surf. A high surf advisory for Maui remained in effect until 6 p.m. Tuesday.

Ignacio is now scheduled to pass approximately 200 miles northeast of the Big Island and Maui, Monday and Tuesday.

"Mainly the impacts are going to be very high surf and some strong wind gusts over the coastal waters," said Reynes, speaking a few hours before the watches were discontinued.

A million gallons of treated but not yet disinfected wastewater spilled from the East Honolulu Wastewater Treatment plant, closing Sandy Beach and its surroundings Thursday. On Monday, 400,000 gallons of wastewater spilled in Ala Moana Beach Park after heavy rains associated with Tropical Storm Kilo inundated the system.

The cause of the Ala Moana Beach Park spill was traced to city sewer pumping stations that were offline because of construction, the Star-Advertiser reported. Honolulu officials confirmed that all stations are online, and workers have positioned extra pumps in case of flooding.