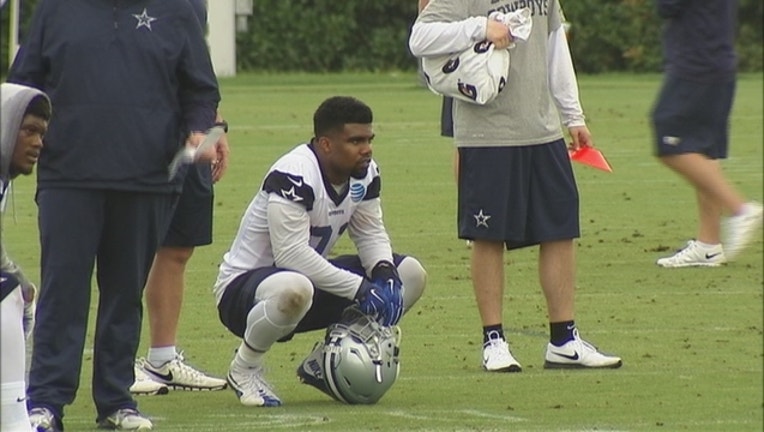 IRVING, Texas (AP) — Ezekiel Elliott ran with the first team in offseason practices for the Dallas Cowboys this week.

That's at least partly because Darren McFadden was out for personal reasons.

As for how the depth chart will look at running back in three months going into the opener against the New York Giants, the Cowboys are tiptoeing around the question in an age when No. 4 overall picks are almost always walk-in starters, regardless of position.

It's an interesting issue in Dallas because McFadden was fourth in the NFL in rushing last season with 1,089 yards even though he was the lead back for just 10 games.

Not to mention that before drafting Elliott out of Ohio State, the Cowboys signed free agent Alfred Morris, who made the Pro Bowl twice in Washington. Or that the versatile Lance Dunbar should return from a knee injury at some point in 2016.

"Those things work themselves out," executive vice president of personnel Stephen Jones said. "If you ever think you're going to go into a training camp and think that people aren't trying to take your job, then you've got a surprise coming in the NFL.

"I know that Darren McFadden, Alfred Morris and Lance Dunbar certainly know that Zeke didn't come in here to watch."

At the same time, Elliott is saying all the right things — the job isn't his and he has plenty to learn. He even acknowledged last week, his first with the full squad in practice, that the speed of the NFL initially shocked him a bit.

But now it's been almost a month since the star of the Buckeyes' title game win two seasons ago at the $1.2 billion home of the Cowboys first took the field with his fellow rookies.

"The game is slowing down," Elliott said Wednesday in front of another throng of reporters in the locker room. "When I was first stepped out there, I really was going off all instincts. Now I can anticipate a little bit more and the game's becoming more comfortable."

McFadden was the fourth overall pick by Oakland eight years ago, so he knows something about the expectations Elliott faces now. Elliott wasn't surprised they quickly developed a good relationship because he said McFadden reached out even before the Cowboys drafted him.

"Ever since I got here, he's been nothing but a help to me," Elliott said.

With the Raiders, McFadden had a similar situation with Justin Fargas, who was coming off his only 1,000-yard season with a career-high four touchdowns when Oakland took the 2007 Heisman Trophy runner-up out of Arkansas.

McFadden signed with Dallas last year, a day after 2014 NFL rushing champion DeMarco Murray left for Philadelphia in free agency. He was No. 2 behind Joseph Randle before Randle got hurt early in the sixth game against the Giants and McFadden filled in with the team's season high of 152 yards.

"I've been around the game long enough that I know there's always going to be a new guy coming in whether they had picked him up in the fourth round or fifth or sixth or first round," McFadden said. "I'm getting older, so I know there's definitely going to have to be somebody to come in and take over."

Jones doesn't see McFadden simply handing the job to the rookie, though.

"As competitive as that room is, the great news is these are all not only good football players but they're good people off the field," Jones said. "They all have leadership qualities. That will be great for Zeke to get to be around those types of professionals."

That includes one who's been exactly where Elliott is now, except for the part about playing for a high-profile team and getting drafted higher than the franchise rushing leader — all-time NFL leader and Hall of Famer Emmitt Smith.

"You kind of got to embrace the expectations, but it's not something I really pay attention to," Elliott said. "I know my expectations for myself. Honestly, they're probably higher than what other people expect of me."

And that includes becoming a starter.