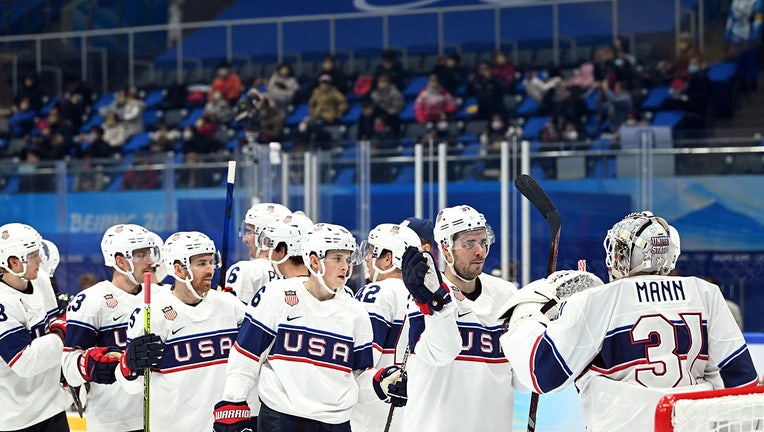 USA's players celebrate their win in the men's preliminary round group A match of the Beijing 2022 Winter Olympic Games ice hockey competition between Canada and USA, at the National Indoor Stadium in Beijing on February 12, 2022. (Photo by KIRILL KU

BEIJING - It's no secret the young United States men's hockey team is fast and skilled.

Turns out the kids can hit, too.

Answering all the questions raised about their youth and inexperience, the U.S. went toe to toe with Canada in a bruising matchup between the longtime rivals. Using not just speed and skill but also a healthy dose of physicality against bigger, stronger opponents, the Americans emerged with a hard-earned 4-2 victory Saturday and are unbeaten in two games at the Olympics.

"We didn’t back down from their physical play," said captain Andy Miele, who led the U.S. with a goal and an assist. "I love the way our team responded. I’m so proud of this group. We took a beating. They kept on going forward, we kept on coming back at them and got the outcome that we deserved."

Thanks to Miele's response goal 70 seconds after Canada scored and 35 saves by Strauss Mann, the U.S. is in the driver’s seat to earn a spot in the quarterfinals. Beating Germany on Sunday night would put the Americans first in the group and could made them the top seed in the knockout round.

With eight players under age 21, the U.S. was one of the hardest teams to figure out in a tournament without NHL talent. The boom or bust potential of the youngest team in the tournament was on full display against Canada.

With Claude Julien back behind the bench two weeks after breaking his ribs in a sledding accident, the Canadians figured they'd use their size and physicality to wear down the smaller Americans over the course of 60 minutes. Instead, the U.S. — with 12 college players on the ice — went hit for hit with Canada and used a combination of offensive skill and bad opposing goaltending to take control of the game.

"The kids can play, I think it’s safe to say," said Kenny Agostino, who scored the fourth U.S. goal. "It’s clear we’ve got a lot of speed and a lot of talent, but I think this was a man’s game tonight: Canada-U.S.A., there’s no real explanation needed. I think all of them stepped up and played like men out there." 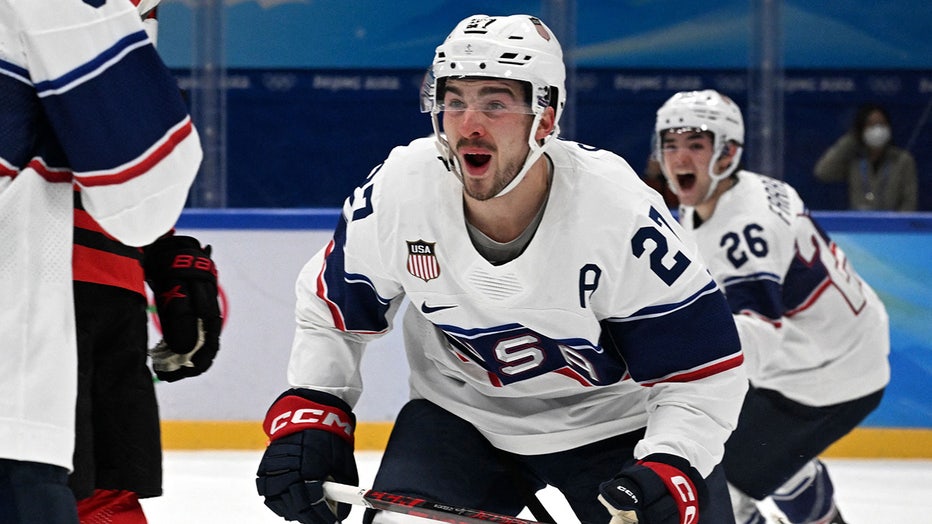 USA's Noah Cates (L) and Sean Farrell celebrate after a goal during the men's preliminary round group A match of the Beijing 2022 Winter Olympic Games ice hockey competition between Canada and USA on February 12, 2022. (Photo by ANTONIN THUILLIER/AFP

There were some hiccups, like Mann allowing a soft goal to Mat Robinson from the boards 40 feet away 1:24 in. Miele's goal kept the U.S. from playing from behind for too long.

Brian O'Neill, the lone returnee from the 2018 Olympics, called falling behind early "good adversity" after routing China 8-0 in the opener. Facing and beating Canada was a test that the U.S. passed by leaning on strengths like playing fast and also adapting to changes in the pace of the game.

"The biggest thing for us is just playing fast," said Harvard forward Sean Farrell, who assisted on Ben Meyers' goal and has six points through two games. "We have a bunch of guys who can play fast, and if we add that physical component as well, it’s going to be really hard for teams to break pucks out, and when we turn pucks over we have the skill to capitalize."

Canada has plenty of skill up and down the lineup, too, but goaltender Eddie Pasquale gave the U.S. a gift when he flubbed the puck behind the net to set up Brendan Brisson's second goal of the tournament. He was also shaky on Agostino's goal.

"I fought the puck pretty much all night," said Pasquale, who allowed four goals on 27 shots. "I gave up two weak ones. If I make those two saves, we’re 2-2 going into overtime."

Instead, Canada wraps up preliminary round play against China on Sunday night hoping to pick up one of the other three spots in the quarterfinals and avoid the qualification round.

"Sometimes you ask your players have short memories," Julien said. "And that’s what we have to have. At the same time, you’ve got to remember why we lost this game and make sure it doesn’t happen in the next one."

In other action, the Czech Republic beat the Russians 6-5 in overtime, Germany beat China 3-2 and Denmark beat Switzerland 5-3.

NOTES: The U.S. and Canada faced off at the Olympics for the first time since the semifinals at the 2014 Sochi Games, the last time NHL players participated. Canada won that game 1-0 on the way to a second consecutive gold medal. ... U.S. defenseman Jake Sanderson played 16:59 in his first game at the Olympics. He was a late arrival in Beijing after being stuck in Los Angeles in virus protocol.