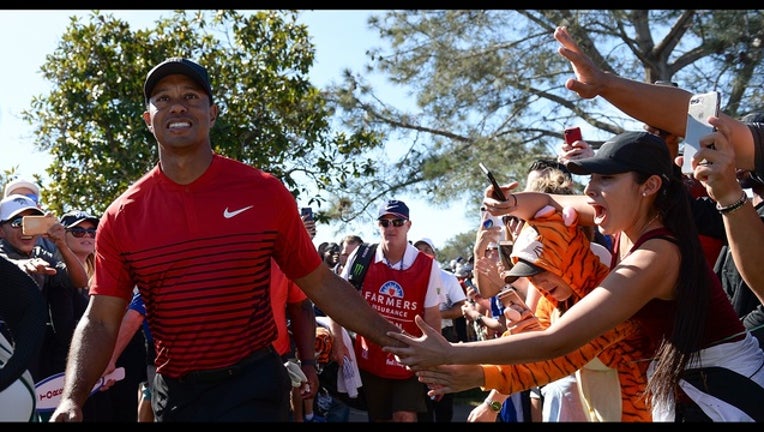 Tiger Woods high fives a fan during the final round of the Farmers Insurance Open at Torrey Pines South on January 28, 2018 in San Diego, California. (Photo by Donald Miralle/Getty Images)

SAN DIEGO (AP) - Tiger Woods was never in contention in his return to the PGA Tour.

He didn't dip into the 60s as he hoped he would on a brilliant sunny - and windy - Sunday at Torrey Pines. He missed three times more fairways than he hit in his four rounds in the Farmers Insurance Open.

Yet he was "very pleased" with only his second PGA Tour event since he tied for 10th in the Wyndham Championship in August 2015. He had two back surgeries that fall, and fusion surgery on his lower back last April.

Woods cooled off after birdies on four of seven holes midway through his round Sunday and finished with an even-par 72 on the South Course that left him tied for 23rd.

"After not playing for a couple years and coming out here on the Tour, playing, you know, a solid four days, I fought hard for these scores," Woods said. "They weren't like drive down the middle, hit it on the green, two-putt, one of those yawners. This was a lot of fight."

They certainly weren't yawners, although Woods once again drew a large, lively gallery as he played the weekend on the PGA Tour for the first time in 29 months.

Woods will be back in his native Southern California in three weekends for the Genesis Open at Riviera.

His to-do list includes "Everything. Just like it was after I played in the Bahamas, have to work on everything. We're going to do the same thing here and I'm excited to get this one under my belt, though."

"I was pleased today. I feel like I played a lot better today. These conditions, they were tough. I was trying to shoot 65, maybe get to 10 and post, thought that might be a good playoff number. But there are too many guys up there, they've gone past 10 and gone to 11 and 12 and there's a bunch of them up there. So it would have been nice to post it, just see what happens, hang around for a couple hours, but I'll take 72, though."

Woods hit only 17 of 56 fairways in his four rounds, three on the South and one on the North, which is no longer considered easier than its neighboring layout at the seaside muni.

"We can see the swing is out of sync. He can feel it's out of sync," said Nick Faldo, a six-time major champion and CBS Sports analyst. "This is one year out - an awful lot of rust. There were only a couple of holes where he hit it down the middle, on the green and had a look."

"He hasn't been close enough to the flag to say, 'I should have been better.' "

This was Woods' 25th start on the PGA Tour since his last victory in August 2013 at the Bridgestone Invitational. It was only the 3rd time he shot par or better all four rounds and only the eighth time he finished in the top 25.

Woods said his body held up.

"It was nice. You know, some of the shots I had to hit out of the rough, out of the trees, shaping them both ways, and a few times I had to jack up the speed and had no issues at all."

Woods has won this tournament seven times, and Torrey Pines was the site of his dramatic win in the 2008 U.S. Open and a Junior World Championship as a teenager.

"It's always fun to come here," Woods said. "This is like near and dear to my heart, just like home. To see some of my friends from high school are out here, things like that, and the people are absolutely fantastic all week. They were loud, they were excited, but they were very respectful. It was nice to play in front of the people like that, and overall I thought I did pretty well this week."

That is, except for the spectator who shouted "Get in the hole!" as Woods was mid-stroke of a 10-foot birdie putt on No. 13. He missed just right of the hole.

Woods paused at one point to chat with Andre Iguodala of the Golden State Warriors. He also wore a red shirt on Sunday at Torrey Pines for the first time in five years.