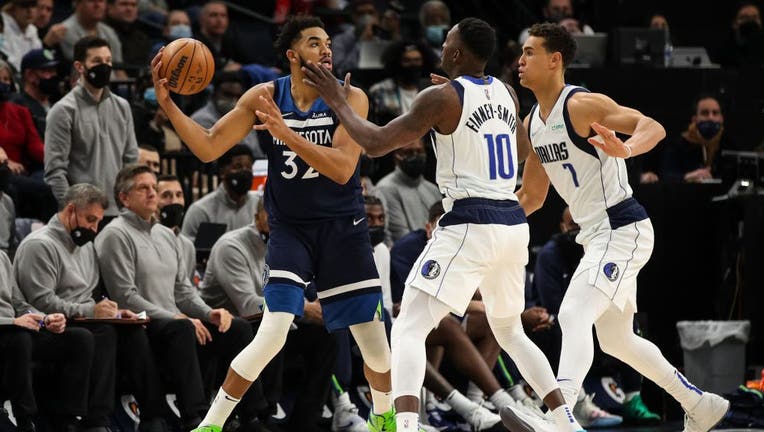 MINNEAPOLIS, MN - DECEMBER 19: Karl-Anthony Towns #32 of the Minnesota Timberwolves looks to pass while Dorian Finney-Smith #10 and Dwight Powell #7 of the Dallas Mavericks defend in the second quarter of the game at Target Center on December 19, 202

Dallas, already without star guard Luka Doncic, placed two players in the health and safety protocols the past two days. Minnesota added Josh Okogie to the protocols and Anthony Edwards and Taurean Prince each missed their second game while in the protocols.

"It’s definitely a difficult situation, not only for our team, the Lakers or the Mavericks, but for the whole, entire league," Towns said. "We got a great win tonight, but we feel we can beat anybody, as long as we’re available. It’s about availability now. We always talk about how health can be the biggest reason why teams don’t win, injuries. But COVID is right up there with the injuries."

"It’s tough, but we’ve got a great group of young men who are going to compete and fight," Kidd said. "They did that here on the road. We didn’t shoot the ball extremely well, but we found a way to stay in the game on the road and it was a one-possession game. We just couldn’t make a shot when we had to."

Jaylen Nowell provided a much-needed injection of shooting with a season-high 16 points off the bench for Minnesota, which has won four in a row.

The Timberwolves led for much of the game, but Dallas closed the third quarter on an 18-7 run to take an 88-86 lead. The Mavericks outscored Minnesota 38-30 in the quarter, but Porzingis left the game with 4:59 left in the third and didn’t return.

Minnesota turned to Nowell, who hit a 3-pointer early in the fourth as the Timberwolves recovered with a 13-5 run.

Without Edwards and with Michael Beasley’s continued struggles shooting, the little-used Nowell was a perfect relief. He scored in double figures for the second straight game and the third time in five games.

"He was amazing again tonight," Russell said of Nowell. "Hopefully, everybody’s paying attention to him."

A day after placing Reggie Bullock in the health and safety protocols, Dallas added Josh Green to the protocols before the game. Kidd also said assistants Darrell Armstrong and Jared Dudley are in the protocols.

The Los Angeles Lakers, who have also lost several players to the protocols, played the Mavericks on Dec. 15 in Dallas’ last game.

Previous to playing Los Angeles, the Mavericks didn’t have many cases of COVID-19 to enter into the protocols. Trey Burke, in late October, is the only player to previously be in the protocols.

Before the game, Kidd said he wasn’t making any medical determinations, but "some who are into betting or guessing, some would say that’s where it came from," he said, regarding the Lakers’ game.

"Our spirit is still high," Kidd said. "No one’s going to feel sorry for you if you’re short-handed in this league. Every team’s going to go through it. It just seems like we’re going through it right now."

Coincidentally, Edwards and Prince missed Friday’s game against Los Angeles and Okogie was added after playing 13:29 in the game.

Timberwolves: Beasley started his second straight game for Edwards and scored 13 on 4-of-13 shooting. … Towns made his first 11 free throws. He finished 11 of 13 from the line. ... With Nowell leading the way, Minnesota’s bench outscored Dallas’ reserves 36-17

The team’s finish back-to-back meetings on Tuesday in Dallas.