Golf return in Fort Worth without fans

The second round of the Charles Schwab Challenge is underway at the Colonial in Fort Worth. The first round was pretty good but a little strange without fans. FOX Sport's Mike Doocy explains.

FORT WORTH, Texas - The start was even more quiet than usual for a Thursday morning on the PGA Tour, only the silence never left over the next 12 hours as golf was back to business at the Charles Schwab Challenge.

Sung Kang made a hole-in-one on the 13th hole and didn't realize it until he was 50 yards from the green.

"I'm like, `Wow, it's in the hole.' It wasn't really crazy. Nobody was really up there, only a few people out there just clapping a little bit," Kang said. "I still appreciated it, though."

Phil Mickelson made a birdie and instinctively pinched the brim of his cap to acknowledge a crowd that wasn't there.

Ryan Palmer, a Colonial member who raised money for COVID-19 relief efforts during the shutdown, was chosen to hit the first official shot on the PGA Tour in three months. Those gathered around the first tee could barely hear him announced. The starter was wearing a mask, and his voice competed with the hum of a generator behind the ninth green.

Quiet as it was, Colonial came to a standstill at 8:46 a.m. when everyone on the course honored a moment of silence for the death of George Floyd and the outrage it has sparked worldwide on racial injustice.

It was a most unusual round of golf. 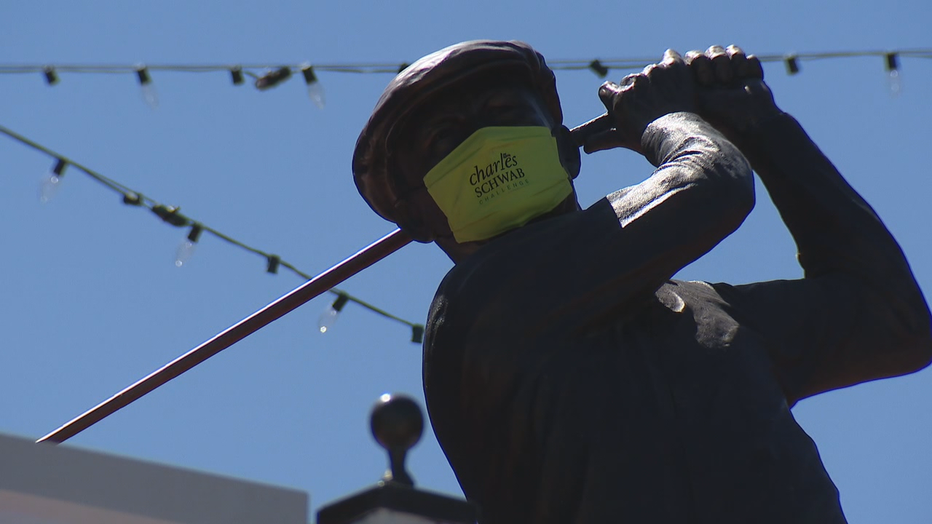 But it was golf.

"I think just being out here is successful, to be honest with you, getting started," Palmer said. "I don't see anything holding us back moving forward. I think today was the biggest day, just getting this first day off. People are going to watch golf back home and be interested to watch it tomorrow, and that's a great thing."

Justin Rose and Harold Varner shared the lead at 7-under 63, with Justin Thomas among those a stroke back. Tom Lehman, a 61-year-old former champion at Colonial, got in on the act with a 65.

Conditions were ripe for good scores with no cheers.

"It kind of feels like a competitive practice round," said Rose, who won at Colonial two years ago. "But obviously, I think we all know what's on the line. We all know what we're playing for. We all know the competition this week especially, the field is incredible. Obviously, we miss the fans. They definitely provide a ton of energy and atmosphere."

Golf is the second major sport in the U.S., behind motor sports, to resume a schedule shut down by the COVID-19 pandemic. Among the safety measures are coronavirus tests for every player, caddie and essential personnel. Of the 487 tests at Colonial, the results were all negative.

"We're all taking risks playing golf, obviously," Palmer said. "Being back out here, everybody leaves the club, they're going out to dinner and doing things, so everybody is taking that risk to be here. Everybody is pretty confident that we're going to all be safe. I think everything has been done the right way."

The top three players in the world -- Rory McIlroy (68), Jon Rahm (69) and Brooks Koepka (68) -- played in the same group, and they had the largest following late in the afternoon. There were 14 people outside the ropes behind the 10th green -- six involved in the broadcast (radio and TV), four writers, two photographers, one coach and one trainer.

The telecast began with an apology. Right when Golf Channel came on the air, Rahm chipped in for birdie on the par-3 eighth and someone -- it could have been inside or outside the ropes -- was heard to say, "Pretty (expletive) good, there."

"Well, we were hoping for better audio with no fans," CBS anchor Jim Nantz said.

PGA returns with Charles Schwab Challenge in Fort Worth

After a 90-day break, the PGA tour is back. The Charles Schwab Challenge is underway at the Colonial Country Club in Fort Worth. Mike Doocy joined Good Day to talk sports.

PGA Tour Commissioner Jay Monahan gave the opening group a thumbs-up after the players hit their drives, and he returned to the tee box alone at 8:46 a.m.

That starting time was listed on the tee sheet without any players. The tour is keeping that empty all four rounds for a moment of silence. It's a tribute to Floyd, who was handcuffed while a white police officer pressed his knee to the back of the black man's neck for 8 minutes, 46 seconds. Floyd died after pleading for air.

Varner is one of four players of black heritage with full PGA Tour status, and he delivered the strongest words last week in a social media post. He also sat down with Monahan for a 10-minute video  on what golf can do.

And then he found himself atop the leaderboard with a round so clean he putted for birdie on every hole.

"If I'm thinking about winning a golf tournament right now, I've probably lost it," Varner said. "Yeah, I know what's going on, but when I'm on the golf course, I'm trying to play well. The reason I have a platform is because I'm really good at golf. I just need to focus on that."

For so long, the only sounds came from the click of contact with the golf ball, the squeak of brakes on carts belonging to broadcast crews, course workers and rules official. And then came a strange noise -- cheering.

A house behind the 16th tee set up a grandstand, while another home erected at two-story hospitality tent with views of a small section of the 15th fairway. They chanted names of players and let out a few roars. Behind the second tee, a few fans watched from behind a chain fence along a public road.

Jordan Spieth, who opened with a 65, was reminded of what to expect before he did a shot.

"I was pulling in when Mickelson was on 4 tee, and when I didn't see anybody there -- and it was a tournament round day, it wasn't a practice round day -- I'm like, `This is certainly weird,"' Spieth said. "I'm just really happy to be playing golf and being able to be competitive again and to be able to finish our season."

It was only one round. Fans will be kept away from the first five tournaments as the tour takes a conservative return to golf, hopeful of no setbacks in the sport from a spike in the new coronavirus.

Monahan, asked Thursday morning what would constitute a successful tournament, said, "Getting to next week."