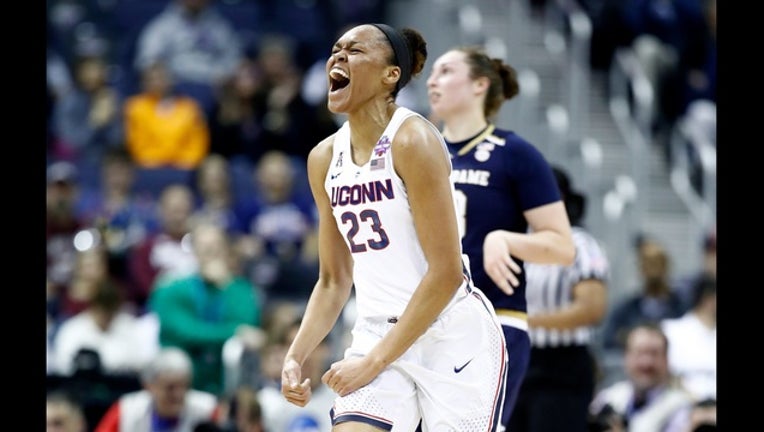 Azura Stevens #23 of the Connecticut Huskies celebrates against the Notre Dame Fighting Irish during the semifinals of the 2018 NCAA Women's Final Four at Nationwide Arena on March 30, 2018 in Columbus, Ohio. (Photo by Andy Lyons/Getty Images)

NEW YORK (AP) - A'ja Wilson is thrilled for the chance to head to Las Vegas.

The South Carolina star was the No. 1 pick in the WNBA draft by the Aces on Thursday night.

"It's such a great feeling, just an amazing way to cap off my collegiate career," Wilson said. "My heart was pounding before she announced the pick."

The 6-foot-5 star admitted she has only been there once, but already knows the Nevada city slogan.

The Aces, who moved to Las Vegas from San Antonio this past winter, had the first pick for the second straight season.

The Chicago Sky took Diamond DeShields, who spent the season playing professionally in Turkey, and Gabby Williams of Connecticut with the next two picks.

"I'm excited to see what we can do," DeShields said.

UCLA guard Jordin Canada was selected fifth by the Seattle Storm. She'll get a chance to learn from Sue Bird.

"I love Sue Bird, she's one of my role models," Canada said.

Azura Stevens, who decided to forego her final year of eligibility at UConn, was taken sixth by Dallas. Washington drafted Ariel Atkins of Texas seventh. Lexie Brown was picked ninth by Connecticut.

New York took Kia Nurse 10th, marking the third UConn player to be taken in the opening round. It's the second time in three seasons that three Huskies were drafted in the first round. UConn players went 1-2-3 in 2016.

"It's really cool that we were all here for each other," Williams said.

Los Angeles drafted 19-year-old Russian star Maria Vadeeva with the 11th pick. She's the first foreign player who didn't play at an American college to be taken in the first round since 2012.

Marie Gulich of Oregon State was drafted by Phoenix to close out the first round.

UCLA's Monique Billings was the final player invited to the draft to be taken. She went with the 15th pick to Atlanta. The Dream had traded for that pick earlier in the day sending Bria Holmes to the Connecticut Sun.

"I wasn't nervous, I knew that I would be drafted," Billings said.

The draft was held at Nike's New York headquarters. The athletic apparel company is a global partner and outfitter for the WNBA this season. They unveiled the new WNBA uniforms earlier Thursday.

Training camps open up on April 29 and the 22nd season of the WNBA begins play on May 18.

Other tidbits from the draft:

PRESIDENTIAL CONNECTIONS: Former President Barack Obama's niece, Leslie Robinson, was taken in the third round by the New York Liberty. Her dad is vice president of player development and G League operations for the Knicks.

GREEK SISTERS: When Wilson was took a picture with WNBA President Lisa Borders on stage, the pair flashed the Alpha Kappa Alpha sign. The two were sorority sisters with Borders graduating from Duke and Wilson from South Carolina. Kappa Alpha Kappa was the first African American sorority starting at Howard in 1908.

ALL IN THE FAMILY: DeShields joined her father (Delino) and brother (Delino Jr.) as first-round draft picks. Father and son were taken in the baseball draft. They are believed to be the first father-son-daughter combo to all be taken in the opening round of a draft. The elder DeShields was in attendance at the draft.

Pam McGee, Imani McGee-Stafford and JaVale McGee were the first mother-daughter-son to be taken in the opening round when McGee-Stafford was drafted with the 10th pick in 2016.