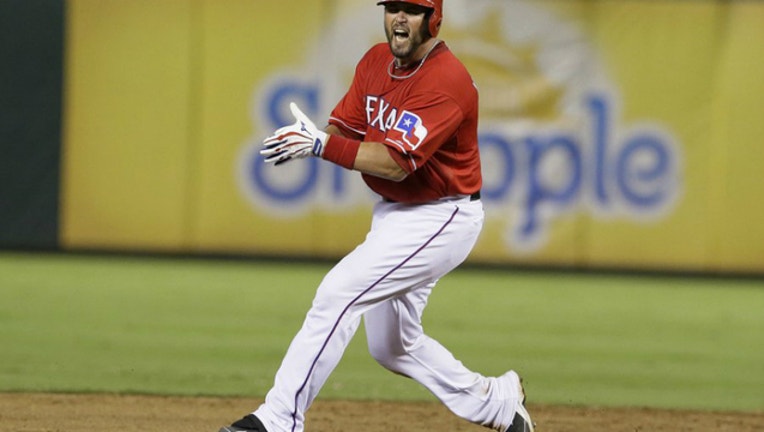 ARLINGTON, Texas (AP) — Bobby Wilson lined a tie-breaking single with two out in the sixth inning, and Adrian Beltre hit his 13th home run as the Texas Rangers beat the Baltimore Orioles 4-3 on Saturday night.

The Rangers have won three straight and increased their lead for the second AL wild card to 1 1/2 games.

The Orioles have lost 10 of their last 12, dropping 4 1/2 games behind Texas. In each loss, they have scored three runs or fewer.

Wilson snapped a 3-3 tie when he lined Mychal Givens' first pitch over third baseman Manny Machado to score Elvis Andrus, who reached on a two-out triple off the wall in left field.

Rangers left-hander Martin Perez (2-3) allowed three runs on seven hits with no walks in 6 1-3 innings, throwing 63 strikes in his 84 pitches.

Ubaldo Jimenez (9-9) gave up four runs in 5 2-3 innings. His last four starts have resulted in two losses and two no-decisions.

Shawn Tolleson earned his 28th save in 30 attempts, stranding runners at first and third in the ninth.

An RBI double by Shin-Soo Choo and Beltre's two-run homer in the third gave Texas a 3-0 lead. The homer was the 408th of Beltre's career, giving him sole possession of 51st place in major league history.

Perez sailed through the first four innings, retiring the first 11 batters, before Baltimore erased the three-run deficit in the fifth. The rally began with Steve Pearce's ninth home run of the season.

Choo has reached base in all 33 starts since the All-Star break, including the last 20 straight games.

Texas is now six games above .500, equaling its season high.

All three outs of the Rangers' fourth inning came at second base. Venable was standing near second when he was struck under the left arm by a ball hit by Wilson. Wilson was forced at second on a single to shallow left field by Hanser Alberto that Adam Jones couldn't catch. Alberto was thrown out at second trying to advance on a pitch to Delino DeShields that wasn't ruled a caught stealing.

Rangers: 2B Rougned Odor hasn't played since coming out of last Tuesday's game when a grounder ran up his right hand and ripped the nail on his middle finger.

Orioles: In 12 starts since coming off the DL in late June, RHP Miguel Gonzalez (9-10) has an ERA of 6.46. Gonzalez has two losses and three no-decisions in his last five outings.

Rangers: LHP Derek Holland (1-1) will make his third start after missing four months with a shoulder injury. He allowed three home runs in six innings last Tuesday in a no-decision against Toronto.