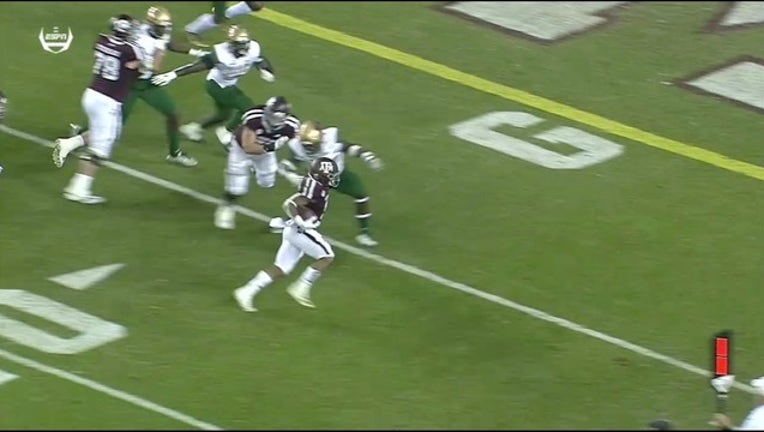 COLLEGE STATION, Texas (AP) - Texas A&M coach Jimbo Fisher didn't spend much time celebrating his team's blowout win over UAB on Saturday night before talking about how the Aggies must improve next week if they hope to upset No. 10 LSU.

Trayveon Williams ran for 167 yards and two touchdowns to lead Texas A&M to the 41-20 victory that snapped the Blazers' school-record eight-game winning streak.

Kellen Mond threw two touchdown passes to Jace Sternberger as the Aggies (7-4) got their second straight win after losing their previous two games.

UAB (9-2), which clinched their first Conference USA West division title last week, lost for the first time since Sept. 8 in a mistake-filled game which included two interceptions by Tyler Johnston, a fumble returned for a touchdown, three missed field goals and a blocked extra point.

"I think the guys expected to win and expected to compete," UAB coach Bill Clark said. "But any big game ... we can't make mistakes and shoot ourselves in the foot."

Fisher was disappointed that his team allowed more than 300 yards passing and that the Blazers were 10 of 16 on third down conversions.

"It was a good solid game but we need to play better," he said. "We don't need to give up that many yards and give up that many third down conversions. So we've got to keep learning to play the passes better and get some more rush and get better."

Things went wrong for the Blazers immediately, with Andre Wilson fumbling the opening kickoff, which was recovered by Larry Pryor and returned 17 yards for the score.

"To get 7 points like that to start off, that was huge," Fisher said.

Pryor called the play, which was Texas A&M's first fumble return for a TD since 2013, crazy.

"I shed a block and I looked up and the ball was in my hands," he said.

UAB bounced back on the next possession, using a 10-play, 75-yard drive, capped by a 9-yard touchdown reception by Wilson to tie it at 7-7.

The first touchdown by Williams, a 9-yard run, put Texas A&M back on top 14-7 with about six minutes left in the first quarter.

Nick Vogel's first missed field came after that, with the 43-yard attempt clanging off the left upright and sailing right back at him.

"The three missed field goals were very uncharacteristic of Nick," Clark said. "He's been solid for us all year."

The Aggies were up 17-7 early in the second quarter when Vogel missed again, this time his 44-yard attempt was blocked by Jayden Peevy.

UAB was driving late in the second quarter when Donovan Wilson intercepted Johnston to give the Aggies the ball back. The second TD by Williams came a few plays later to extend Texas A&M's lead to 24-7.

Texas A&M added a field goal on its first possession of the second half and Vogel's third miss came after that.

Sternberger extended Texas A&M's lead to 34-7 when he grabbed a 25-yard touchdown reception late in the third. His 20-yard catch extended it to 41-13 with about nine minutes left.

The Blazers recovered a fumble to set up a 10-yard TD reception by Wilson before Sternberger's second touchdown, but Vogel's extra point attempt was blocked.

UAB entered the game leading the nation with a school-record 38 sacks and piled up seven in a win over Southern Miss last week. They didn't have nearly as much success in getting to the mobile Mond, sacking him just once.

"Pretty much the whole night, I felt really comfortable in the pocket," Mond said. "I thought the offensive line did a really good job and Trayveon in protection as well."

UAB: The Blazers moved the ball well and looked good at times, but had far too many errors to beat a SEC team.

Texas A&M: Mond didn't have a turnover after committing six in the last three games combined. He'll have to continue to play clean football next week when the Aggies host LSU for them to have a chance at the win.

Braden Mann had a punt for 60 yards on Saturday night to give him 14 punts of 60 yards or longer this season to set an NCAA record. He passed Ryan Plackemeier, who had 13 in 2005 for Wake Forest.

Williams has 1,326 yards rushing this season to put him in fifth place on the school's single season rushing list. He's just the sixth player in school history to run for 1,300 yards in a season and he's also in fifth place on the school's career rushing list with 3,181 yards. The SEC's leading rusher has had four games this season with multiple touchdowns and seven 100-yard rushing games.

Texas A&M: Host LSU next Saturday night to wrap up the regular season.