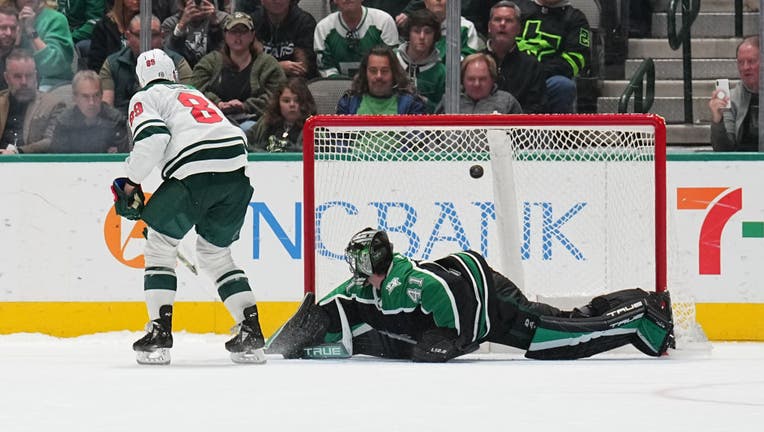 DALLAS, TX - DECEMBER 4: Frederick Gaudreau #89 of the Minnesota Wild scores in a shootout against the Dallas Stars at the American Airlines Center on December 4, 2022 in Dallas, Texas. (Photo by Glenn James/NHLI via Getty Images)

Mats Zuccarello, Kirill Kaprizov and Frederick Gaudreau scored on Minnesota’s three shootout attempts and the Wild beat the Dallas Stars 6-5 on Sunday after blowing a four-goal lead in the third period.

Coming off a 5-4 shootout victory over Anaheim on Saturday, Minnesota ran its winning streak to four.

"This one feels good," Gaudreau said. "We kept our calm."

Roope Hintz had his second career hat trick for the Stars, who earned points for the 10th time in 11 games. Jason Robertson and Joe Pavelski scored to open the shootout, but Hintz’s backhander rolled just short of the goal line, giving Gaudreau the chance to end it.

Hintz’s final goal, with an extra skater on, tied it at 5 with 2:11 left in regulation.

"They pushed, we gave up the big lead," Wild coach Dean Evason said. "But did we quit? Did we shut it down? Did we stop playing? No. They just kept going about their business."

"We knew if we got one, we were going to get more," said Hintz, whose previous hat trick came in November 2021. "It’s good we got one point."

Minnesota used a three-goal burst in a 2:50-span of the second period to take a 4-1 lead and made it 5-1 29 seconds into the third after Dallas goalie Jake Oettinger was replaced by Scott Wedgewood.

Dewar opened the second-period flurry with a short-handed goal and Middleton and Greenway also connected.

Dewar’s goal midway through the second period was the Wild’s NHL-leading fifth short-handed goal and the first allowed by Dallas this season.

Kaprizov has a career-best 12-game points streak (eight goals, 11 assists) and a six-game goal streak. The goal streak matches his own franchise record shared with Nino Niederreiter and Brian Rolston.

The Wild are 3-1 in shootouts and 7-3 after regulation., Dallas is 0-2 and 0-6. … Robertson has 41 points, third in the NHL. … Greenway and Oettinger were teammates at Boston University for two seasons.

Wild: At Calgary on Wednesday night.