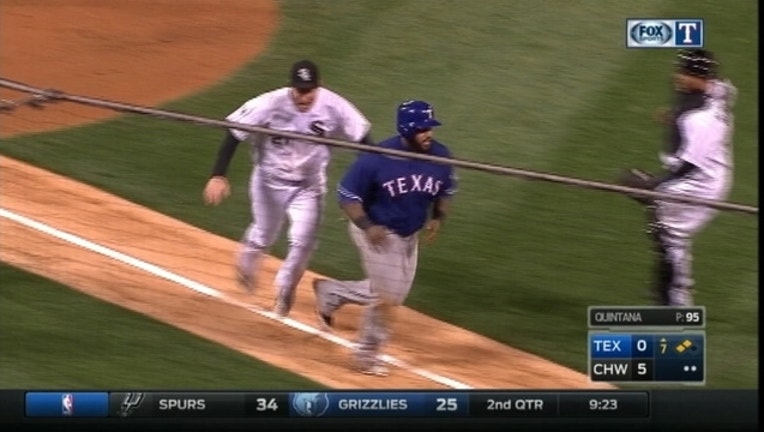 Quintana retired 11 straight through six innings until he loaded the bases on Prince Fielder's double, Adrian Beltre's single and a walk. Mitch Moreland drilled a ball down the right field line that Adam Eaton caught on the run as the runners took off.

Eaton threw to first to get Ian Desmond, and the White Sox eventually got Fielder in a rundown between third and home to finish the play. It was the first time Texas got caught in a triple play since June 1, 1991, against Seattle, and the first one the White Sox turned since Sept. 18, 2006, against Detroit.

It was the first non-quality start of the season for Perez, but he got no help from an offense that had 13 hits in six innings against Cy Young Award winner Dallas Keuchel a day earlier.

It was 45 degrees at first pitch, with the wind making it colder and holding up fly balls as Lawrie wore a ski mask.

The White Sox went ahead 1-0 on Perez's second-inning wild pitch. The ball squirted just to catcher Bryan Holaday's right, but he couldn't find it. As Perez ran toward home pointing to the ball, Melky Cabrera scored from third after reaching base on a single.

Chicago's triple play was the first in the majors this season. Matt Albers extended his scoreless streak to 31 innings and Zach Putnam pitched the ninth to finish the five-hitter.

White Sox: C Dioner Navarro was attended to, but stayed in after Ryan Rua's foul tip ripped off his mask in the second.

The Rangers' Adrian Beltre started his 2,500th game at third base. Only Brooks Robinson (2,870) has started more games there.

White Sox LHP Carlos Rodon (1-2, 4.73) looks to recover from a career-worst outing Saturday when he faces Rangers RHP Colby Lewis (1-0, 4.00). Rodon allowed five runs, six hits and two walks in 1/3 of an inning in Monday's loss to the Angels.