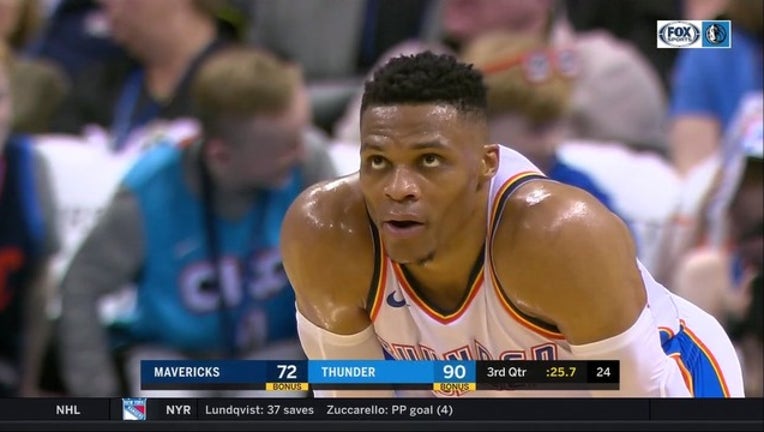 OKLAHOMA CITY (AP) - Russell Westbrook had 32 points, 11 rebounds and 11 assists, and the Oklahoma City Thunder gained a split of their back-to-back against the Dallas Mavericks, never trailing in a 122-102 victory on Monday night.

Paul George added 22 points and Jerami Grant had 16 for the Thunder, who had dropped three of their last four games. That included a 105-103 loss at Dallas on Sunday, when Oklahoma City blew a six-point lead in the final 1:59 and Westbrook went 4 of 22 from the field and scored only nine points.

Westbrook promised after that game, "We play tomorrow and I'll be better from then on," and was true to his word, going 13 of 24 from the field and knocking down midrange bank shots with regularity as the Thunder built a 60-43 halftime lead.

Dallas coach Rick Carlisle burned five of his seven timeouts in the first half in an effort to stem the tide, but the Mavericks proved unable to overcome a 1-for-9 start from the field. Dallas committed 29 turnovers, the most ever by a Thunder opponent.

Harrison Barnes led Dallas with 25 points, matching his career high with seven 3-pointers in nine attempts, and Luca Doncic had 17 points. The Mavericks are 2-16 on the road, offsetting their 15-3 home record.

As the Mavericks were misfiring to start the game, George scored 16 points in the first quarter as Oklahoma City built a 17-point lead. The Thunder led by as many as 22 in the first half.

Consecutive 3-pointers by Dennis Smith Jr. and Doncic pulled Dallas within 69-57, but a bucket by George, a steal and layup by Westbrook and an alley-oop dunk by Grant off Westbrook's pass led Carlisle to burn his final timeout at the 6:45 mark of the third quarter, with his team down 75-57.

Despite going 8 of 13 from 3-point range in the quarter, Dallas made no headway, trailing 92-75 at its end. Barnes hit two more 3-pointers to cut the margin to 94-81 with 10:59 left, but George scored and Abdel Nader followed with a 3-pointer to rebuild Oklahoma City's lead. Dallas came no closer than 14 points the rest of the way.

Mavericks: F Wesley Matthews returned after missing two games with right foot soreness, but Dallas made F Dirk Nowitzki inactive, citing "return from injury management" after he played 10 minutes on Sunday night . The Mavericks were called for a technical foul with 6:43 left after Carlisle called a timeout Dallas did not have . Dallas went 14 of 38 from 3-point range.

Thunder: C Steven Adams had 12 points and 13 rebounds . Nerlens Noel scored 15 points in 15 minutes . G Alex Abrines sat out due to what the team called personal reasons. . G Terrance Ferguson started despite being listed as questionable with a stomach illness . The Thunder are 9-2 on New Year's Eve since the franchise moved to Oklahoma City . After playing Dallas on consecutive days, the Thunder won't see the Mavericks again until March 31.

Thunder: At the Los Angeles Lakers on Wednesday.