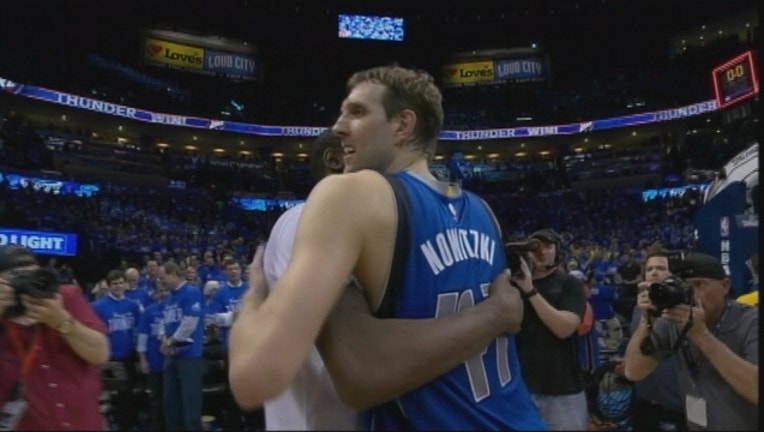 Westbrook gave him plenty of reasons to reconsider.

He had 36 points, 12 rebounds and nine assists, and the Thunder beat the Mavericks 118-104 on Monday night to win the first-round playoff series 4-1 and advance to the Western Conference semifinals.

Cuban also said during the pregame interview that Kevin Durant was the only superstar on the team. Westbrook was asked after the game about Cuban's comments, and Durant answered for him.

Westbrook was 13 of 23 from the field and 7 of 8 on free throws. Durant scored 33 points and Steven Adams added 15 points and 10 rebounds for the Thunder, who will play the San Antonio Spurs in a series that begins Saturday.

Oklahoma City shot 50.6 percent from the field and outrebounded the Mavericks 42-35.

The Thunder lost Game 2 85-84 at home, then won three straight, including two on the road.

"They just played gimmicky defense," Durant said. "They didn't really play solid. They weren't really disciplined the entire series. That's how we were able to shoot such a high percentage except for that second game. It took all of that to win by one point — us having a historically bad night shooting the basketball. But for the most part, we got whatever we wanted on the offensive end."

Dirk Nowitzki scored 24 points. Though the 37-year-old forward said Monday that he plans to finish his career as a Maverick unless the team decides to rebuild, Dallas coach Rick Carlisle is still going to recruit him.

"We've got to hope that this isn't Dirk's last game as a Maverick," Carlisle said. "He has the option to become a free agent. I'm ready to get on a plane to go to Germany and recruit him to be back. I don't think we can take that for granted. I think we have to give him that kind of respect."

Dwight Powell scored 16 points, Justin Anderson had 14 and Zaza Pachulia added 12 points, nine assists and seven rebounds for the Mavericks, who were hampered by injuries throughout the series.

Westbrook scored 13 points in the first quarter to help the Thunder take a 35-24 lead. The Mavericks closed to 57-55 in the second quarter, but Oklahoma City finished the half strong to lead 68-61 at the break.

The Mavericks trimmed Oklahoma City's lead to 107-103 with 4:08 left before the Thunder pulled away, starting with a follow shot by Andre Roberson.

"We had it where it was a four-point game," Nowitzki said. "Westbrook heaves one from 35 feet, and all we need is to get the rebound, but Roberson gets the loose ball and lays it in. I feel like that sums up this entire series. Every time we were right there, they always came up with every loose ball the entire series."

After that, Durant hit a fadeaway and was fouled by Nowitzki, who was then called for a technical. Durant made both free throws to put Oklahoma City up 113-103 with 2:49 to play.

Center Salah Mejri and forward David Lee missed the game with injuries. Mejri initially strained his right hip in the fourth quarter of Saturday's game. The 7-foot-2 rookie from Tunisia started the playoff opener against the Thunder, then came off the bench the next three games. Lee sat out with a right plantar fascia injury. He missed the first two games of the series, then played a reserve role in Games 3 and 4, scoring six points in both games.

Nowitzki on Westbrook: "He's pretty much unguardable. He can drive left. He can go right. He can finish at the rim with the best of them. He's probably the best offensive rebounding guard this league has ever seen. If he makes those pullups behind a screen, there's not much you can do but high-five him and tell him, 'Good game.'"

Mavericks: Had just seven rebounds in the first quarter. ... Shot 52.6 percent in the first quarter and still trailed by 11 at the end of the period. ... Pachulia's nine assists were a career playoff high. He'd never had more than three in a postseason game.

Thunder: Durant was coming off his first game with fewer than 20 points since Nov. 10, 2015, a span of 67 straight games. ... Adams' 15 points were a career playoff high. It was just his second playoff double-double in 23 career playoff games.