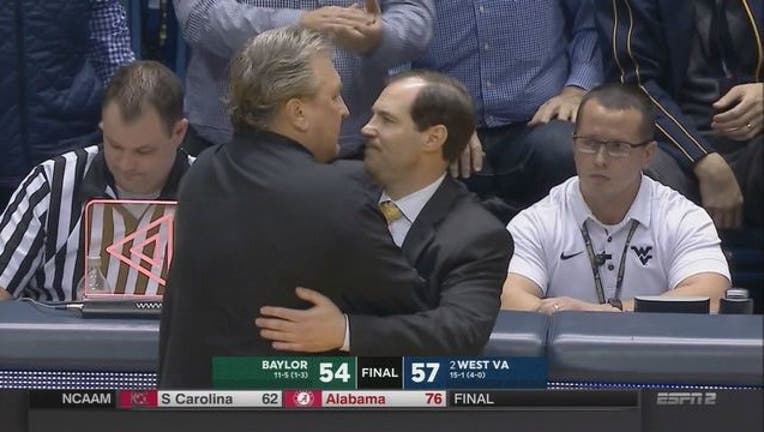 A look at the upcoming weekend around the Big 12:

GAME OF THE WEEKEND: No. 2 West Virginia at No. 8 Texas Tech on Saturday. The Red Raiders shot just 6 of 25 from 3-point range in Tuesday's 75-65 loss at No. 9 Oklahoma, their first Big 12 defeat of the season. But the Mountaineers were nearly stunned by unranked Baylor, winning just 57-54. They shot just 31 percent, but West Virginia's pressure defense forced 21 Bears turnovers and secured its 15th consecutive win.

LOOKING AHEAD: There's also a huge matchup in Norman, where Oklahoma hosts No. 16 TCU - which has been ranked for seven weeks in a row after a rough start to its Big 12 tenure. Kansas State travels to Kansas, Baylor plays Iowa State on the road in a meeting of league cellar dwellers and Texas plays Oklahoma State in Stillwater.

PLAYER TO WATCH: Freshman Teddy Allen of West Virginia. Allen was named the league's newcomer of the week on Monday after averaging 21 points in just 21.5 minutes in wins over K-State and Oklahoma. But Allen then went scoreless on Tuesday, and in his last eight games he has scored 15 or more points four times - and two or less four times. Which Allen will show up in Lubbock this weekend?

INSIDE THE NUMBERS: Oklahoma, led by incomparable freshman guard Trae Young, leads the league in scoring offense at 93.1 points a game. Young had 27 points with nine assists against the Red Raiders - though he needed 23 shots to get there. Still, Young is just two assists from tying the school record for a freshman with roughly half the season left. Texas Tech entered Wednesday's games allowing a league-low 60.2 points a game - and tops in scoring margin at 19.9 points an outing and field goal percentage defense at .375. Kansas star Devonte' Graham is second behind Young with 18.1 points per game and is tied with Nick Weiler-Babb of Iowa State for second in assists - behind Young, of course - with 7.5 assists.

ON THE WOMEN'S SIDE: Baylor was fifth in Monday's poll, while Texas was seventh. The Lady Bears travel to Oklahoma on Saturday while the Longhorns host No. 1 Connecticut in the non-conference biggest game in Austin in years. West Virginia slipped to 15th after back-to-back losses to Kansas State and Texas.