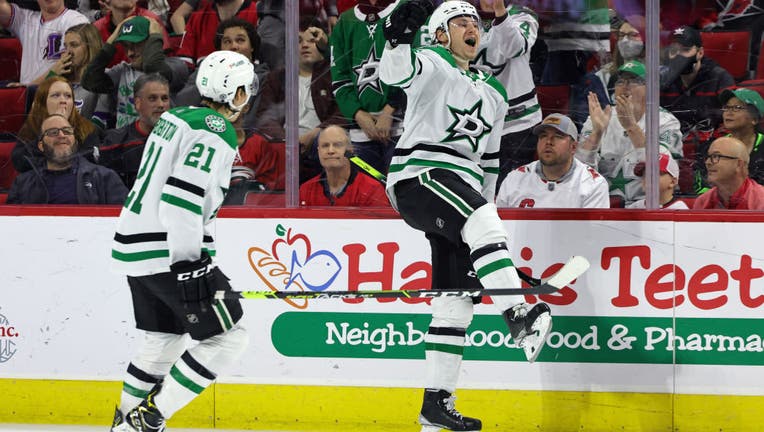 RALEIGH, NC - MARCH 24: Roope Hintz #24 of the Dallas Stars scores the game tying goal and celebrates with teammate Jason Robertson #21 who collects the helper during the third period of an NHL game against the Carolina Hurricanes on March 24, 2022 a

RALEIGH, N.C. - Scott Wedgewood made quite a first impression with the Dallas Stars in leading them to their third win in a row.

Wedgewood’s first game in net with the Stars was a record-setter and he was further rewarded when Tyler Seguin scored in the shootout for a 4-3 victory against the Carolina Hurricanes on Thursday night.

"I think I was a little nervous just to get going and make a good impression," Wedgewood said after stopping 44 shots and then denying all three of Carolina’s shootout attempts.

It was the most saves in franchise history for a goalie playing his first game with the team, breaking the record of 43 set nearly 38 years ago by Jon Casey for the Minnesota North Stars.

"He stole that game for us tonight, there’s no question," Stars coach Rick Bowness said.

Nino Niederreiter had two goals and Vincent Trocheck scored the other one for the Hurricanes. Brady Skjei set up both of Niederreiter’s goals.

Frederik Andersen was credited with 12 saves for Carolina. He stopped Michael Raffi’s penalty shot with 5:51 to play in regulation when the score was tied.

"If we play like that, we’re going to win a lot of hockey games," Skjei said.

Wedgewood is with his third team this season. He began with New Jersey and then was acquired by Dallas this week from the Arizona Coyotes.

The 29-year-old Wedgewood was playing his 70th NHL game. He has been up and down from the minors, put on waivers and traded twice this season. Through it all, he said he just wants to make a difference.

"Take it all in stride and obviously make the most of it," he said.

The Hurricanes figured they did enough for a better result.

"I don’t know if I’ve seen a better game in 20 years being here as far as doing everything we were trying to do," coach Rod Brind’Amour said. "We just didn’t get it in the net as much as we’d like, and then we lost the talent show at the end."

Hintz tied the game with his team-leading 27th goal at 3:43 of the third period. That came one minute after Trocheck’s tying goal off a power-play rebound for Carolina.

Niederreiter posted his second goal at 10:24 of the third. Hintz responded 59 seconds later.

"He seems to find a way to score big goals when we need it," Benn said.

Benn converted on the first shot of the second period after the Hurricanes controlled the first period without scoring. Alexander Radulov’s pinpoint pass set up Benn just 30 seconds in.

Niederreiter tied the game when Skjei’s pass found him in the slot at 6:44 of the second.

"We were badly outplayed by Carolina," Bowness said. "That’s as poor of a game we’ve had managing the puck."

The Hurricanes built an 18-4 advantage in shots on goal in the first period. In the past three Carolina games, neither team has scored in the opening period.

"Right now, we've just got to stay positive and find a way to get some greasy goals," Niederreiter said. "I feel like at the beginning of the year, all the pucks just found a way to go in."

Vladislav Namestnikov made his Stars debut after he was obtained in a trade with Detroit. The forward was on the receiving end of a series of punches from Hurricanes defenseman Brett Pesce, who drew instigator and misconduct penalties early in the second period.

The Hurricanes won only once during a four-game homestand, going 1-1-2. Yet at 24-5-4, they have one of the top home-ice records in the league.

Hurricanes: At the St. Louis Blues on Saturday night.