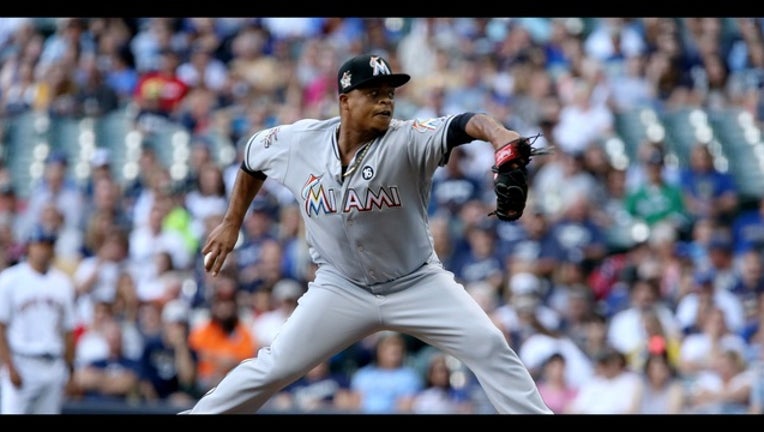 Edinson Volquez #36 of the Miami Marlins pitches in the first inning against the Milwaukee Brewers at Miller Park on June 30, 2017 in Milwaukee, Wisconsin. (Photo by Dylan Buell/Getty Images)

SURPRISE, Ariz. (AP) - Edinson Volquez has agreed to a minor league contract with the Texas Rangers, returning to his original team with a chance to be a candidate for the rotation in 2019.

The 34-year-old Volquez will not pitch this season while recovering from ligament reconstruction surgery on his right elbow last August.

The minor league agreement announced by the Rangers on Friday includes an invitation to major league spring training. It covers the 2018 and 2019 seasons.

Volquez has a 93-87 career record in 276 games for seven teams. He made his MLB debut for the Rangers at age 22 on Aug. 30, 2005, and was traded to Cincinnati after the 2007 season in the deal that sent slugger Josh Hamilton to Texas. He has also pitched for San Diego, the Los Angeles Dodgers, Pittsburgh Kansas City and Miami.

In his first season for the Reds, Volquez went 17-6 and was an All-Star. He was a 13-game winner for the Royals when they won the World Series in 2015, and threw a no-hitter for Miami last season.