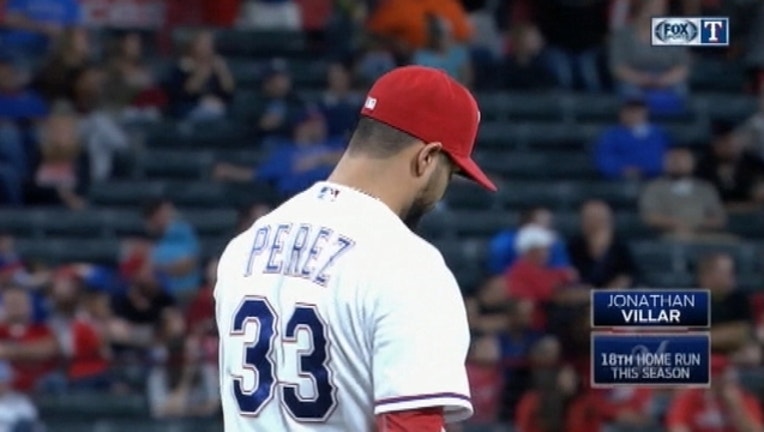 The loss dropped American League West-champion Texas one-half game behind the Boston Red Sox in the race for the league's best record. The Cleveland Indians pulled within one-half game of the Rangers.

Villar, the major leagues' stolen base leader with 59, hit a two-run homer in the fifth inning and a three-run shot in the seventh. He also doubled.

Garza (6-8) allowed three runs and six hits in six innings. He spent the second half of the 2013 season with Texas as a rental acquisition from the Chicago Cubs, going 4-5 with a 4.38 ERA. It was Garza's first appearance against Texas since 2010.

Rangers starter Martin Perez (10-11) was looking to set a career high for wins in a season. He gave up a season-high eight earned runs and nine hits in 6 2/3 innings. His home record this season fell to 8-3.

Jonathan Lucroy, who played 6 ½ seasons for Milwaukee before being traded to Texas on Aug. 1, faced his previous team for the first time. Lucroy went 1 for 4.

Jeremy Jeffress, acquired by Texas in the same trade, made his first appearance since being reinstated Friday from the restricted list. He was arrested on a drunken driving charge in Dallas on Aug. 26 and was sent to an inpatient rehab clinic. Jeffress retired all four batters he faced.

Milwaukee clinched fourth place in the NL Central. . Perez added to his major league-leading total of groundball double plays induced with his 36th of the season in the sixth inning. . Elvis Andrus and Carlos Gomez, another former Brewer, both had three hits for Texas.

Brewers: RHP Taylor Jungmann won't pitch again this season after suffering a hip abductor during his start last Saturday night, which was his first in the majors since April.

Brewers RHP Jimmy Nelson (8-15) leads the NL in losses after getting off to a 3-1 start. Rangers RHP A.J. Griffin (7-4) lasted only 1 2/3 innings last Tuesday in Anaheim, allowing three hits and four walks. If Texas elects to go with four starters in the Division Series, Griffin is a contender for the final slot.