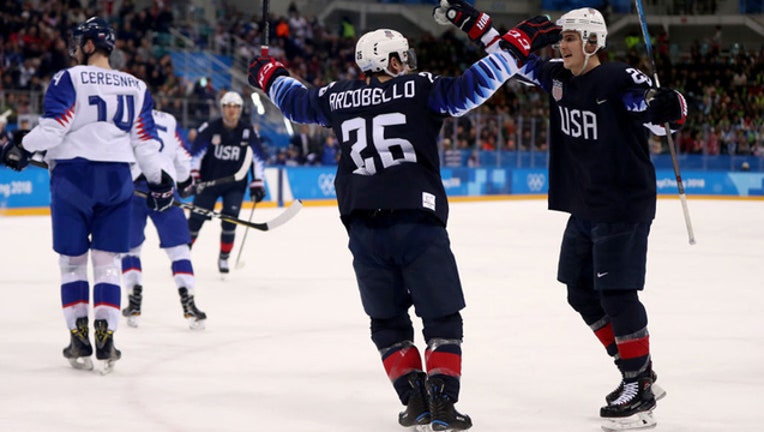 Mark Arcobello #26 of the United States celebrates with his teammates after scoring a goal in the second period during the Men's Play-offs Qualifications game at the PyeongChang 2018 Winter Olympic Games. (Photo by Ronald Martinez/Getty Images)

GANGNEUNG, South Korea (AP) - Tony Granato knew going into the Olympics that Ryan Zapolski would be his goaltender and that the college kids on the Team USA roster would be counted on to supply offense.

It's worked just like Granato and the late general manager Jim Johannson had hoped, and just in time: Zapolski stopped 21 shots in his best game of the tournament and NCAA players Ryan Donato and Troy Terry dominated offensively in a 5-1 win against Slovakia that put the United States into Wednesday's quarterfinals against the Czech Republic.

"Jimmy, like we said since Day One, this is his plan," Granato said Tuesday's win. "It's been a really nice mix."

Zapolski and Donato both took hits to the head against Slovakia, and both said they were fine afterward.

It looked worrisome at the time.

In a frightening play, Ladislav Nagy crashed into Zapolski's head and the goaltender was down on the ice for several minutes. Needing to be on top of his game in the Americans' first elimination game, Zapolski was, even after jamming his neck.

"My hands and feet went numb a little bit, so it just kind of pinched my nerve, I guess," Zapolski said. "I think I just needed time for the feeling to come back. It took a little bit. It was a little bit of a scary thing for me kind of losing feeling in your body for a little bit, but it went away pretty quickly."

Donato took a shoulder to the jaw from 6-foot-4 Slovakia defenseman Michal Cajovsky, who was ejected, and didn't miss a shift despite a bloody nose he thought might be broken. On the next play, he set the screen on James Wisniewski's 5-on-3 power-play goal in a game that helped the U.S. get its offensive groove back.

"He's a really tough kid, and you see how much just of a natural goal-scorer he is," Terry said of Donato. "He's fun to play with, and if I get the puck to him I know it's got a pretty good chance of going in."

Donato and Terry have had fun and made some magic playing on a line with former NHL forward Mark Arcobello, who Granato joked was the happiest person at the Olympics because of his skilled linemates. Arcobello, who scored his first Olympic goal against Slovakia, knew at the first practice how good Donato and Terry would be.

"You could just see the talent they've got," Arcobello said. "They look like pros. They don't look like college players. They're poised and they do the right things. They're smart players. So I knew right away they were going to be pretty good."

Johannson and Granato wanted to bring three to seven college players and hoped they'd be this good. But their first conversation about a player was about Zapolski, a 31-year-old journeyman with no North American professional experience above the ECHL.

Zapolski is among the best goaltenders in the Kontinental Hockey League but conceded "maybe things weren't going the way I had hoped the first few games" when he allowed a few soft goals. There were none of those against Slovakia.

"In a tournament like this, you only win if you have a good goalie," Wisniewski said. "You're going to have to have a good power play and a good penalty kill, but your best penalty killer is going to be your goalie. With his numbers he's had in the KHL, he's come in ready to play every game, which has been huge for us."

It's huge for the U.S. to get its power play and offense going. And to no one's surprise, Harvard's Donato, University of Denver's Terry and Boston University's Jordan Greenway are at the forefront.

"You see it more and more in the NHL with these young kids coming in and making a huge impact," Wisniewski said. "They come in guns a blazing, they get every opportunity and they want you to make plays. The game has changed and you can see with the guys on our team."

The U.S. came into the game scoring only four goals in three games. Scoring five against the team Granato called perhaps the best defensive team in the tournament has the Americans feeling good going into the quarterfinals.

"I think people saw tonight we have a very fast team and a team that can play good hockey," Terry said. "So we have a lot of belief in our team and we're excited to keep going."

Despite a 4-0 loss to the Russians to wrap up group play, Granato and his players believe they've gotten better each game and see a benefit in playing the extra qualification-round game to keep improving. The Czech Republic is up next for the U.S.

"There's some different weapons that we'll have to be aware of," Granato said. "I think what we learned from our team is it doesn't matter what the other team does. We have to attack, we have to get in on the forecheck, we have to use our offensive players that we do have, the skillset that we do have."

Elsewhere in the qualification round:

- Norway eliminated Slovenia 2-1 in overtime for its first Olympic win since 1994. Norway will face the Russians on Wednesday in its first Olympic quarterfinal appearance, while Slovenia played without Ziga Jeglic, who was suspended for doping.