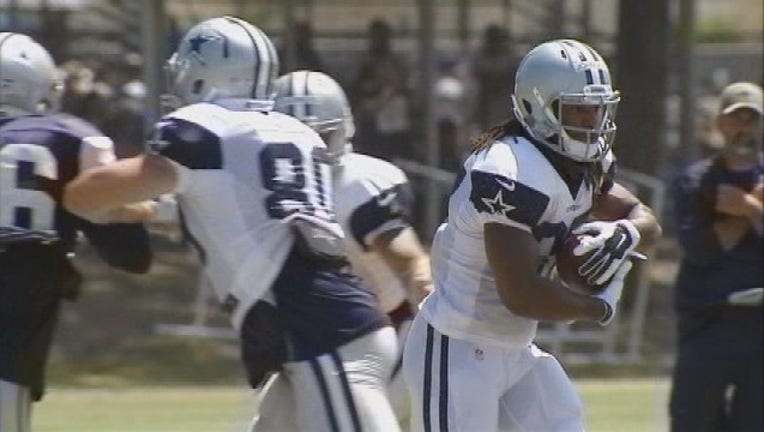 OXNARD, Calif. (AP) — Gus Johnson might never get a better chance than the undrafted rookie running back will have for the Dallas Cowboys in their preseason opener.

Injuries to the top three candidates to replace NFL rushing champion DeMarco Murray could mean Johnson is the starter in San Diego on Thursday night. A month ago, Johnson was unsigned and waiting for a phone call that finally came just before the Cowboys reported to training camp in California.

The Cowboys are unlikely to do much to settle their biggest offseason question when they face the Chargers. But it's a sudden opportunity for a heavy workload for Johnson and second-year back Lache Seastrunk, a former Texas high school star who attended Oregon and Baylor.

"It's big, you know," said Johnson, who was a tryout player at rookie minicamp after rushing for 3,907 career yards at Stephen F. Austin in the second-tier Football Championship Subdivision. "All eyes are going to be on the preseason games to see who can play, who can't play. You get a lot of work in during camp but you just never can fully get the full game experience."

Joseph Randle, Murray's backup for two years, is a clear front-runner to be the lead back, partly because the other leading candidates haven't been healthy. Darren McFadden, an injury-plagued free agent pickup, still hasn't practiced at training camp because of a hamstring issue and Lance Dunbar has missed a week with a right ankle sprain.

The likelihood of Randle playing against the Chargers dropped significantly when he left practice Monday with a strained muscle in his side and was limited Tuesday for the final workout before the visit to San Diego.

There's a chance Randle, Dunbar and McFadden will practice together for the first time Saturday. And if they all stay healthy, opportunities could dwindle fast for Johnson and Seastrunk after going to San Diego.

All of which coach Jason Garrett says should be ignored.

"The biggest thing that a young player needs to understand is don't look around," Garrett said. "Don't count the depth chart. Don't figure out the number. What the other running backs are doing or not doing has nothing to do with those guys. They are going to get a chance to play. They have to take advantage of it."

Seastrunk was a sixth-round pick by Washington last year and was cut by the Redskins at the end of the preseason. He spent time on the practice squads in Carolina and Tennessee but never appeared in a game. He's getting Garrett's message.

"Just another game on the calendar, sir," Seastrunk said. "There's no big game this or big game that."

The Cowboys are thin enough at running back that fullback Tyler Clutts is likely to see time at tailback. He's been working there in camp. Ray Agnew, another fullback, is the fourth available back assuming Randle, Dunbar and McFadden don't play.

"It's next man up and we're working on those guys," offensive coordinator Scott Linehan said. "We're trying to find out what some of these younger guys can do."

The Cowboys will get a long look Thursday night.