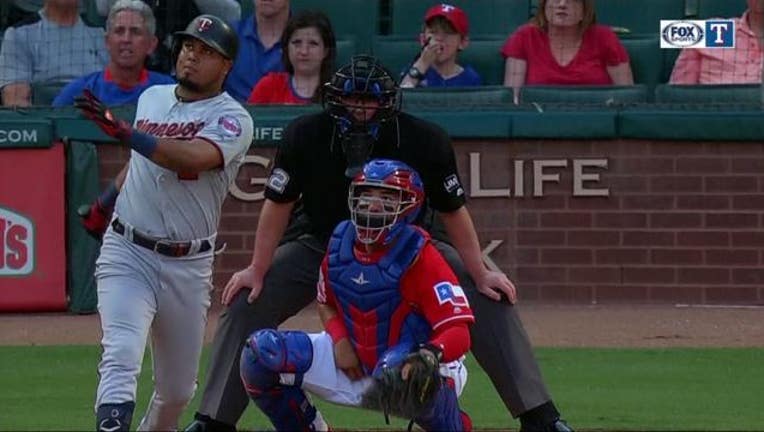 ARLINGTON, Texas (AP) - Luis Arraez hit the first of three more homers by the slugging Minnesota Twins, putting them ahead to stay in a 13-6 win over the Texas Rangers on Thursday night.

Miguel Sanó and Eddie Rosario also went deep for Minnesota (73-48), which maintained a half-game lead over Cleveland for the AL Central lead. With 41 games left in the regular season, the Twins' 236 homers are 31 short of the MLB record set by the New York Yankees last year.

After C.J. Cron reached on a one-out error on the second, rookie second baseman Arraez homered to right for a 2-0 lead. Arraez's third homer was part of a five-run inning. Jake Cave had an RBI double before a throwing error by shortstop Elvis Andrus allowed two runs to score.

Marwin Gonzalez had a pair of RBI singles among his four hits, and Minnesota led 11-0 after Sanó hit his 22nd homer with two outs in the fifth. The Rangers, at the time, still had only one hit off Michael Pineda (8-5) in his return from the injured list after missing two weeks because of a right triceps strain.

Willie Calhoun led off the Rangers fifth with his 11th homer, and Andrus had an RBI single to make it 11-3. Rosario then homered to start the Minnesota's sixth, his 27th homer, matching his career high.

Pineda struck out six with one walk while allowing three runs and six hits over five innings. He threw 55 of 86 pitches for strikes in his first start since Aug. 1, in the ballpark where he made his major league debut eight years ago.

Drew Smeltzer threw the final four innings for his first save.

After the Rangers got another leadoff homer in the sixth on Hunter Pence's 18th, they had four more hits - two for extra bases - in the inning and got only one more run. Calhoun was out trying to score on a double by Rougned Odor, who was then thrown out when he took off home on a groundball to third. The inning ended when Jose Trevino rounded third base and couldn't get back in time after a RBI double by Delino DeShields.

Twins: DH Nelson Cruz (left wrist) is expected to hit on the field at some point this weekend. Cruz was put on the 10-day injured list last Friday, a day after he was injured on a swing. "There's no reason to really rush anything," manager Rocco Baldelli said. "Says he's feeling good and he's ready to go." Cruz is hitting .294 with 32 homers and 76 RBIs in 87 games. ... C Willians Astrudillo (strained left oblique) started a rehab assignment with Double-A Pensacola.

Rangers lefty Mike Minor (11-6, 2.90 ERA) has pitched 16 consecutive scoreless innings, and has won his last three starts since the trade deadline passed with him still in the Texas rotation. Minor is coming off consecutive 1-0 wins on the road. Twins right-hander Jake Odorizzi (13-5, 3.44), who got his first big league victory against Texas five years ago, threw 5 2/3 scoreless innings in his last start, and has allowed one or no earned runs in 13 starts.