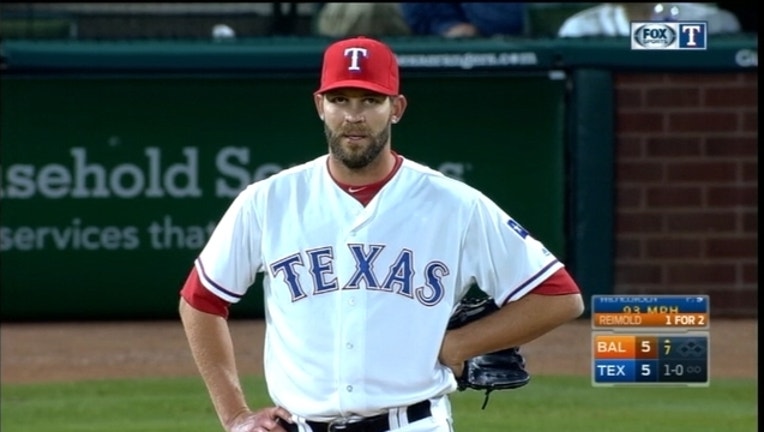 The Orioles trailed after Trumbo's two-run homer chased Martin Perez with no outs in the seventh. They went ahead to stay when Jonathan Schoop and Nolan Reimold hit back-to-back homers off Tom Wilhelmsen (1-1), and Trumbo added a three-run shot off a second reliever later in the inning.

Trumbo is the first Baltimore batter ever with two homers in the same inning, and first in the majors since Toronto's Edwin Encarnacion against Houston on July 26, 2013, according to STATS. Trumbo's eighth career multihomer game ran his total to five homers in his first season with the Orioles.

Schoop homered again in the eighth, a solo shot for his third of the season and his third career game with multiple homers.

Baltimore starter Vance Worley (1-0) had already thrown his last pitch before the Orioles became the first team in nearly three years to homer four times in the same inning. Detroit homered four times in the fourth inning against Baltimore on June 1, 2013, according to STATS.

Texas got each of its runs off Worley in the second. Mitch Moreland homered with one out, and then the Rangers loaded the bases on two walks and a single before Bryan Holaday was hit by a pitch to force in a run. Delino DeShields added a two-run single and rookie Nomar Mazara had a sacrifice fly.

The Orioles, who snapped a two-game losing streak that followed their majors-best 7-0 start, had three homers in a span of four batters in the seventh.

After Trumbo's first homer, J.J. Hardy greeted Wilhelmsen with a single and Schoop followed with a tying two-run shot. Reimold then went deep for the second time this season.

Wilhelmsen was charged with five runs while recording two outs. The big right-hander has allowed 10 runs in 1 1-3 innings in his three home appearances for Texas since being acquired from Seattle in an offseason trade.

Rangers: C Chris Gimenez, who started the season on the 15-day disabled list with a staph infection near his left ankle, was cleared to resume baseball activities. He hasn't played since a spring training game March 26.

Orioles: Right-hander Yovani Gallardo (1-0), who grew up in nearby Fort Worth and still lives there, pitches against the Rangers after playing for them last season. Gallardo turned down a $15.8 qualifying offer by Texas and eventually signed a $22 million, two-year deal with the Orioles that includes a 2018 team option.

Rangers: Texas plays the third of 13 at home in a 16-game streak. Right-hander Colby Lewis (1-0) makes his third start of the season after going six innings in each of the first two.