Tom Landry memorabilia exhibit will soon be on display in Dallas

In November, the Dallas Historical Society will unveil an incredible new collection of items from the team’s first head coach, Tom Landry.

DALLAS - This NFL season will mark the 60th anniversary of the Dallas Cowboys.

In November, the Dallas Historical Society will unveil an incredible new collection of items from the team’s first head coach, Tom Landry.

In the bowels of the Hall of State building at Fair Park, where some of the most incredible pieces of Texas history are being preserved, there’s a new collection of things ready to be put on display.

Property that belonged to the late Tom Landry.

Fittingly, the items are together now, just a hail mary’s toss from Cotton Bowl stadium, where Landry got started on coaching the Cowboys into becoming America’s team.

“Can’t express how important it is to have it come home,” said Karl Chiao, the executive director of the Dallas Historical Society.

It’s a collection that Chiao had been hoping to land for years.

In March, the family agreed to hand over countless items from Landry’s life.

“We went over to Tom’s house and we just were given a treasure trove of wonderful items,” Chiao recalled.

Much of the treasures were obvious, but some pieces were discovered with Tom Landry Jr.’s help.

“When you go in the closet, as far as he’s concerned, these are just dad’s clothes,” Chiao said. “But you see a jacket and you’re like wait, that’s from the Ice Bowl. So there’s significance to a lot of this stuff.”

Most of the items were on exhibit during the 2010 Texas State Fair, but not all of them. 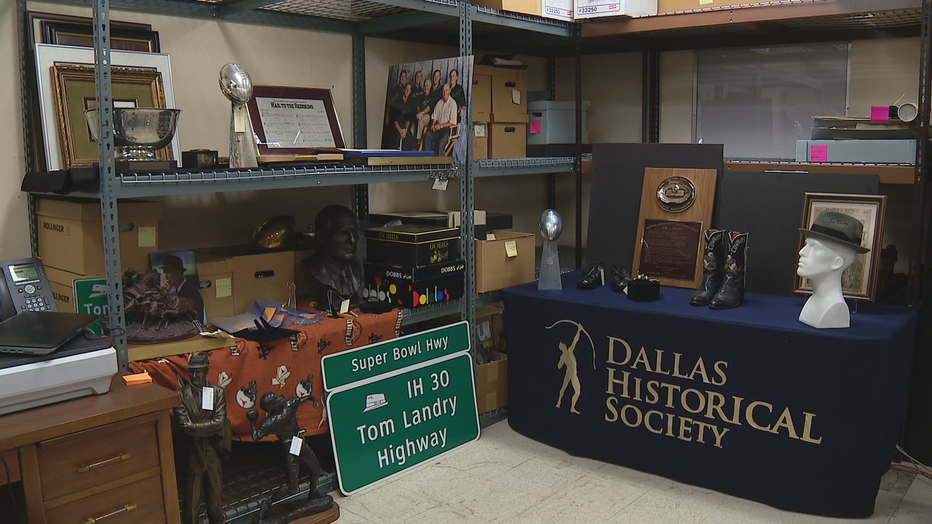 In his visit to Alicia Landry’s home in March, Chiao received a new item to add to the collection - the only pair of Landry’s game day shoes the family still had.

“Tom handed me a duffle bag and said, ‘Look, we found these shoes inside this duffle bag. These were dad’s game worn shoes, you should take them.’ So we did,” Chiao said.

The shoes were reunited now with Landry’s most famous fashion statement, the fedora.

“The number of fedoras. The story I heard was that this company, Dobbs, they saw Tom wearing fedoras. They said, ‘Look, we’ll ship you however many fedoras you need and we’ll just keep shipping them to you if you just keep wearing them.’ Tom Jr. said the house used to just be full of fedoras,” Chiao said.

The collection of football artifacts is overwhelming. From the ball signed by Landry and everyone on that very first Dallas Cowboys team in 1960, to his Pro Football Hall of Fame bust, his championship rings as a player and coach, and his Super Bowl trophies.

All of that, and more, can now be shown off in Dallas and beyond.

“As the custodian of this collection, when other museums want to see parts of it, for instance, if Canton wants to have this at the NFL Hall of Fame, we’ll curate an exhibit for them,” Chiao explained.

But first, the exhibit will be revealed to the public in Dallas.

A chance for some to relive the good old days, and for others, who were born after the Landry era, to learn about the man who led the Cowboys for 29 seasons.

“I think this new generation will learn a lot,” Chiao said.

The Dallas Historical Society will be hosting a one-night event on November 12, where fans can get their first up-close look at the collection.

That will include a panel of several of Landry’s former players.

Tickets will go on sale in August.