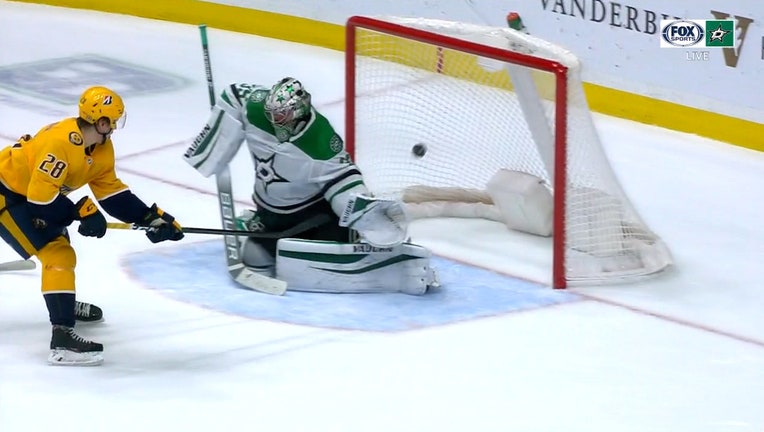 Tolvanen scored at 1:29 of overtime to give the Predators a 3-2 victory over the Dallas Stars on Tuesday night.

Calle Jarnkrok had a goal and an assist and Roman Josi also scored for Nashville.

"I think it’s a big step for our group," Nashville coach John Hynes said. "The fact that you have that intense of a game and things don’t always go your way all the time, but we stayed with it, and guys got rewarded for it and found a way to win."

Juuse Saros made 33 saves for Nashville. He has won his last four starts.

Jason Robertson and Roope Hintz scored, and Miro Heiskanen had two assists for Dallas, which has lost three straight. Anton Khudobin finished with 23 saves for Dallas.

The Predators’ streak started in Dallas against the Stars on March 21, in a shootout.

In overtime, Dallas forward Denis Gurianov had the puck inside the Nashville blue line and then threw it behind the Nashville net. Predators defenseman Alexandre Carrier sent a pass to Viktor Arvidsson on the right side. He skated it up ice and sent a cross-ice pass to Tolvanen on the left side. Tolvanen skated in and cut to the low slot and lifting a backhand shot under the crossbar.

"I was in the shootout a week ago against (Khudobin), so I just thought maybe go to the backhand and try to go bar down," Tolvanen said.

Tolvanen has points in a career high six straight games.

Following the game, Dallas coach Rick Bowness was not pleased with Gurianov’s decision with the puck.

"That was a gift, that’s all I’m going to say on that," Bowness said. "That was a complete gift."

The teams close out a two-game set on Thursday.

Robertson scored the game’s first goal at 6:12 of the second period.

From the left circle, Gurianov left a drop pass for Robertson, who beat Saros with a wrist shot low to the far side.

"We’re still searching for a couple more goals throughout the game because you need more goals to win games," Robertson said. "It’s frustrating, but I’m really happy with our effort in the first period."

With Nashville on a power play, Jarnkrok sent a pass from the left side to Josi, who was standing just above the right circle. Josi beat Khudobin with a one-timer high to the stick side.

The assist was the 200th point of Jarnkrok’s NHL career.

Just six seconds after Nashville’s Ben Harpur was sent off for tripping, Hintz buried the rebound of Heiskanen’s shot from the blue line.

Jarnkrok tied it again in the third.

Luke Kunin’s shot from the right side missed wide, but the rebound came off of the end boards right to Jarnkrok, who was camped out alone on the left post. He converted it for his 11th goal of the season.

"They might have been a little better than us in the first and second period, and we just kept going and had our best period last," Jarnkrok said. "We stayed with it the whole game. It was a big win for us."

This season, the Stars’ power play has feasted on Nashville’s penalty killing units. In the five games between the teams this season, Dallas has scored 10 power-play goals in 18 opportunities with the man-advantage, good for an impressive 55.6%. Dallas entered Tuesday with the NHL’s 11th-best power play at 23.4%.

Robertson has recorded a point in five of his last six games, including goals in three of his last four. In March, the rookie has five goals and 11 assists in 17 games played.

Predators forward Filip Forsberg missed his third consecutive game due to an upper-body injury. The team lists Forsberg as day-to-day. His 11 goals are tied with his fellow Swede Jarnkrok for the Nashville team lead.