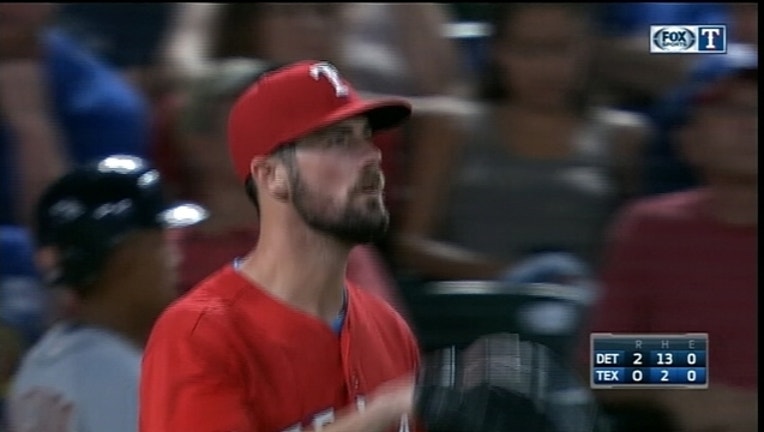 Boyd (4-2) limited the Rangers to two hits with three strikeouts and two walks in his longest start this season. The left-hander is 4-0 his last six starts.

Detroit opened the fifth with three consecutive singles, McGehee leading it off and scoring on a hit by Victor Martinez for a 1-0 lead. McGehee added an RBI double an inning later.

The 14 hits were the most ever allowed by Hamels (12-4), who also walked three, but the Tigers left 11 runners on base against him, seven in scoring position. The lefty benefited from a double play, two outfield assists and a pickoff for his final out of the game.

The only 1-2-3 inning for Hamels was his last one, when he had consecutive strikeouts before giving up a single to Mike Aviles and promptly picking him off first base.

Shane Greene worked the eighth and Francisco Rodriguez the ninth for his 33rd save in 36 chances.

It was Detroit's sixth shutout of the season, while the Rangers were held scoreless for the sixth time.

The Tigers had runners thrown out at third and home by outfielders in the fourth.

Avilies tried to advance from first on Jarrod Saltalamacchia's single to left, but Jurickson Profar got his first career outfield assist with a one-hop throw to third baseman Adrian Beltre. The inning ended with Saltalamacchia out trying to score when Ian Kinsler blooped a double down the line that ricocheted off Shin-Soo Choo when he slid trying to catch it. But the right fielder got up, retrieved the ball from foul territory and threw to catcher Jonathan Lucroy, who made a sweeping tag for the out.

It was only the fourth time in Rangers history that a starter allowed 14 hits, the first since Matt Harrison against Tampa Bay in 2012. Harrison was one of the players sent to Philadelphia last summer in the trade to acquire Hamels, who is since 19-6 in 35 starts for Texas. ... Detroit had lost six in a row to Texas.

Tigers: Dixon Machado made his season debut at shortstop, a day after Jose Iglesias (strained left hamstring) became the Tigers' third everyday starter in a week to go on the disabled list. ... Aviles made his first start in center this season, filling in for injured Cameron Maybon.

Rangers: Colby Lewis threw a 30-pitch bullpen, and is expected to throw 40 pitches Tuesday. Lewis, 6-1 before a strained right lat in June, is eligible to come off the 60-day DL next Sunday. ... RHP Tanner Scheppers, out all season after left knee surgery, threw live BP, and is now expected to begin a rehab assignment Tuesday with one inning for Double-A Frisco.

Tigers: Rookie right-hander Michael Fulmer (9-3, 2.43 ERA) takes his sixth shot at becoming the first AL rookie to win 10 games. He allowed two runs over seven innings in a loss Monday at Seattle after no-decisions his previous four starts — all games the Tigers won.

Rangers: The Rangers have won the last four starts by A.J. Griffin (5-1).