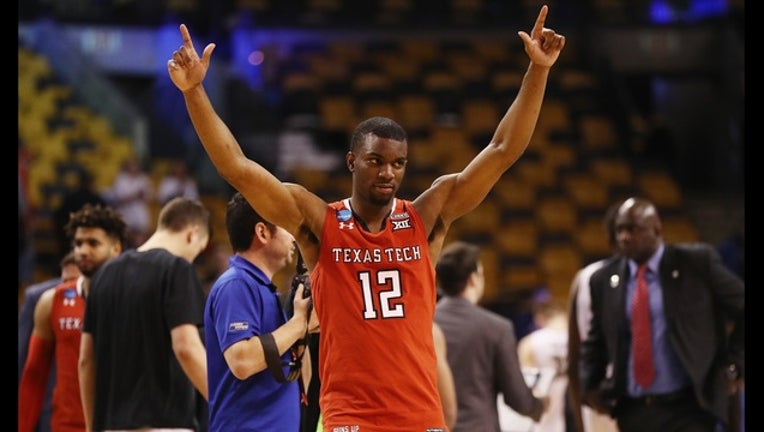 Texas Tech coach Chris Beard gathered his seniors in a tight circle around him when they came out of their final game with 9 seconds left - and one win short of the Red Raiders making it to the NCAA Final Four for the first time.

Smith, All-Big 12 guard Keenan Evans and Justin Gray wrapped four-year careers at Tech that began with a 3-15 record in Big 12 play as freshmen in 2014-15, and ended in the Elite Eight, a 71-59 loss to No. 1 seed Villanova in the East Region final. Niem Stevenson and Tommy Hamilton IV, the other departing seniors, transferred into the program after Beard arrived two years ago.

"I'm just so appreciative of our seniors during the coaching change and sticking with us," Beard said after Sunday's season finale. "And to almost get to that final weekend, I think, speaks a lot about those guys, their character. Proud of our five seniors."

The Red Raiders were Big 12 runner-ups in the regular season to Kansas, which is in the Final Four. Their 27 wins were the second-most in school history, behind only the 30 wins in 1985-86, a Sweet 16 team in the final Southwest Conference season. A No. 6 ranking in the AP poll in mid-February was their highest ever.

"This is the way I wanted to go out," Evans said. "Ultimately, we fell short. But this is all I ever wanted. ... Just knowing the work we put in paid off. I definitely saw this type of season coming."

When coach Tubby Smith unexpectedly left for Memphis, just weeks after a somewhat surprising NCAA Tournament appearance two years ago, the returning starting point guard quickly bonded with the new coach who had been a Red Raiders assistant under Bobby Knight.

Evans was hampered with a toe injury the last five weeks this season, and only after the loss to Villanova revealed how bad it was. He was playing with a broken big toe on his left foot.

Smith, a preseason All-Big 12 pick by coaches, missed 14 games with a foot injury. He was back the final week of the regular season.

"Just for us digging down and us going through injuries; Zach coming back and playing his heart out, we took a lot of pride with it," Evans said.

While five seniors finished up, Tech had two freshman starters with hometown guard Jarrett Culver and high-soaring Zhaire Smith, who had a 360-degree alley-oop dunk in the first round of the NCAA tourney.

The top two-scoring freshmen in school history were among six freshmen on this year's roster, including guard Davide Moretti from Italy. Starting center Norense Odiase and Florida transfer Brandone Francis both have another season of eligibility remaining. Beard has already signed several touted recruits for next season.

"When I look at how big of a talent they are and how much room they have to improve, and then I think about the coaching staff that we have .... it's definitely going to be on the rise," Evans said during the NCAA Tournament about the team moving forward after this season.

After recognizing his seniors, Beard had a message for returning players: "I told our young guys, we'll do everything we can in the next 364 days to be back here."