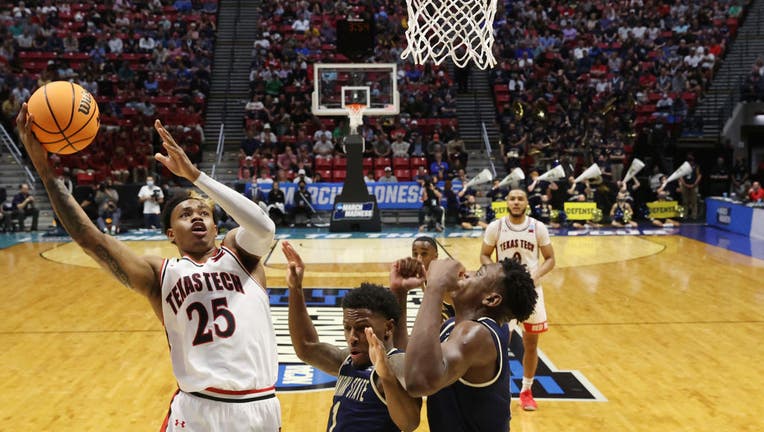 SAN DIEGO, CALIFORNIA - MARCH 18: Adonis Arms #25 of the Texas Tech Red Raiders goes up for a layup against the Montana State Bobcats during the second half in the first round game of the 2022 NCAA Men's Basketball Tournament at Viejas Arena at San D

SAN DIEGO (AP) - Terrence Shannon Jr. scored 20 points and set a dominating tone in the opening minutes for Texas Tech, which overwhelmed Montana State 97-62 Friday with one of the best-shooting games in the first round since the NCAA Tournament expanded to 64 teams in 1985.

Texas Tech, the No. 3 seed in the West Region, was too big, quick and talented for the Bobcats (27-8), who were making their

"I feel like everyone was unselfish," Shannon said. "Nobody was hurrying shots. We did a good job moving the ball, and when we play unselfish and selfless we're a pretty good team."

The Big Sky champion Bobcats won the opening tipoff and Shannon welcomed them back to March Madness by blocking Amin Adamu's shot. Two possessions later, Shannon hit the first of his 3-pointers in the first four minutes to erase Montana State's only lead.

"My teammates, they found me when I was open," Shannon said. "We had a lot of assists. And I just wanted to bring energy to the game. And I was just playing off that."

The Red Raiders led 18-4 less than five minutes in after hitting four 3-pointers, blocking two shots and forcing the Bobcats into a shot clock violation.

Texas Tech took a 52-25 halftime lead, using a swarming defense to feed an impressive combination of 3s and inside shots. Kevin Obanor worked the baseline for two reverse layups and had a slam dunk.

Williams, named to the All-Big 12 First Team and Big 12 Newcomer Team, had two of the Red Raiders' seven 3s in the first half. He scored 12 points in the second half.

"We obviously didn't play our best today and almost 100 percent of that has to do with Texas Tech," Montana State coach Danny Sprinkle said. "It felt like they were guarding me. I couldn't see even see my play card. They make every catch hard. They contest not only every shot, they contest every pass, and they made it really difficult for us."

The 97 points broke Texas Tech's previous NCAA Tournament record, set in a 92-73 win over North Carolina in the second round in 1996.

"You guys be careful how you say that,"

Later, Adams said, "I was a little concerned. I don't want our guys thinking too much offense. I want them to stay with our identity on defense. But seriously, it's one of the best offensive games we've had. We really shared the ball."

Sprinkle was a freshman at his alma mater 26 years ago, the last time the Bobcats reached the NCAAs. They were seeded No. 13 and lost to No. 4 seed Syracuse 88-55.

Texas Tech's Williams was playing in his first NCAA Tournament game, and in his home state, no less. The super senior spent two seasons with Fresno State in his hometown before spending three seasons at UTEP and then moving on to Texas Tech this season.