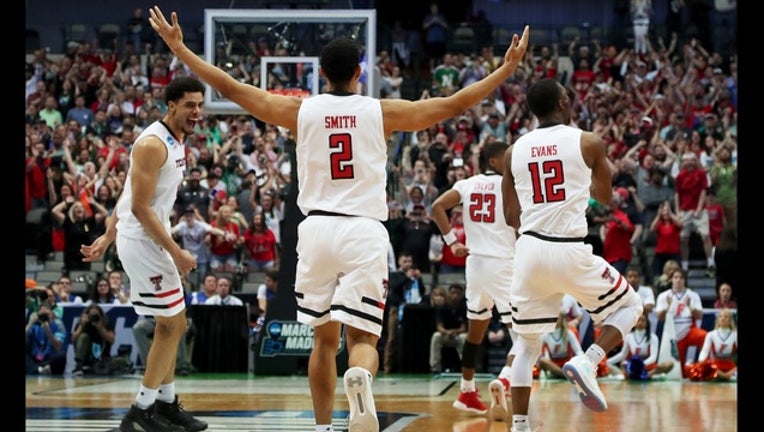 Zhaire Smith of Texas Tech celebrates in the second half against the Florida Gators during the second round of the 2018 NCAA Tournament at the American Airlines Center on March 17, 2018 in Dallas, Texas. (Photo by Tom Pennington/Getty Images)

EVANS SHOW: Texas Tech senior guard Keenan Evans has continued to be the Red Raiders' go-to scoring threat. He comes in averaging 17.8 points per game and has posted 23 and 22 points in their first two tournament wins.

STILL NO HAAS: Matt Haarms, a 7-foot-3 redshirt freshman, is expected to start again at center for the Boilermakers even though senior Isaac Haas got fitted with a new brace to protect his fractured right elbow. He hasn't been cleared to play but is holding out hope the new brace will allow him to compete at some point. Haas has been out since suffering the injury in the first round against Cal State Fullerton. But his teammates have figured things out without him, coming off a 76-73 win over Butler.

STATS WATCH: Purdue is ranked second nationally in 3-point percentage (42 percent). That is its highest 3-point percentage since 1988. The Boilermakers' offense is ranked second in KenPom's offensive efficiency ratings, behind Villanova. Two of Texas Tech's top scoring threats are freshmen Jarrett Culver and Zhaire Smith, who have combined for 798 points this season. That makes them the highest scoring freshman duo in program history.

QUOTABLE: "Definitely took a nap. That was on the list for sure." - Purdue forward Vincent Edwards, on what he did with his downtime after the team arrived early ahead of East Coast snowstorm.