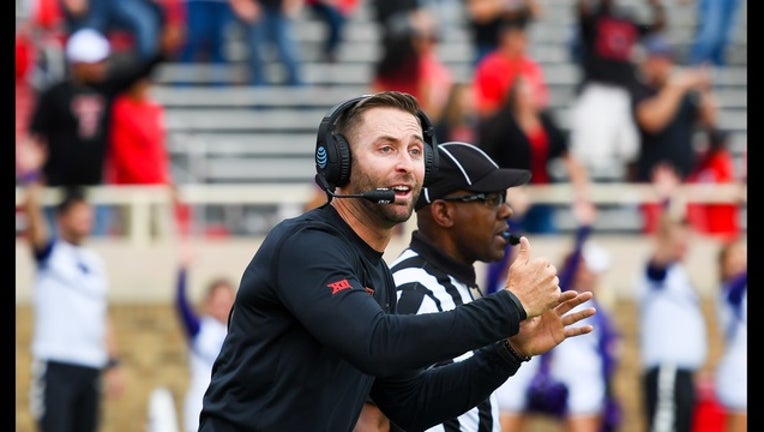 LUBBOCK, Texas (AP) - Kliff Kingsbury was fired Sunday by Texas Tech after the former record-setting Red Raiders quarterback had a losing overall record in his six seasons as their head coach.

The move came a day after the Red Raiders finished their third consecutive losing season with a 35-24 loss to Baylor when they had a chance to get bowl eligible. That was their fifth straight loss after a 5-2 start this year, though it seems unlikely that a win in the finale would have saved Kingsbury's job.

Kingsbury finished with a 35-40 overall record, a .467 winning percentage that is better than only two of the other 14 Texas Tech coaches in the program's history.

Texas Tech was 19-35 in Big 12 games under Kingsbury, including 3-6 in the conference each of the past three seasons even while consistently having one of the nation's top offenses with quality quarterbacks. The Red Raiders have now gone nine consecutive seasons without a winning record in Big 12 play.

"We've had one of the most highly prolific offenses in the nation and we still sit here today with a losing record over the past six years," Hocutt said. "We've got to be a well-rounded football team. We cannot be one-dimensional and have success in this league."

The Red Raiders averaged 520 total yards and 38 points a game under Kingsbury. They gave up 487 yards and 37 points a game, even while showing periods of improvement in defensive coordinator David Gibbs' four seasons.

After starting 7-0 in Kingsbury's debut in 2013, the Red Raiders finished 8-5. They had a five-game losing streak before beating Arizona State in the Holiday Bowl to cap what ended up being his best season.

Hocutt said Kingsbury described Kingsbury as a good man who represented Tech in a first-class manner.

"He epitomizes class and he is truly a Red Raider," Hocutt said.

"For what he achieved and contributed to Texas Tech, as an athlete, a student and our football coach, Kliff Kingsbury has a special place in the hearts of Red Raiders," Texas Tech President Lawrence Schovanec said. "As a coach, he was a model of class and character, and he always put the best interests of his student-athletes first. I admire and appreciate all he has done for Texas Tech."

Kingsbury was only 33 when he took over as head coach of his alma mater following Tommy Tuberville's unexpected resignation after the 2012 season.

At the time, Kingsbury was coming off his only season as offensive coordinator at Texas A&M in 2012, when Aggies quarterback Johnny Manziel became the first freshman to win the Heisman Trophy. Kingsbury had previously coached Case Keenum at Houston.

Kingsbury's specialty is quarterback, the position he played for 43 games at Texas Tech while throwing for 12,429 yards and 95 touchdowns from 1999-2002.

"Thank you @TTUKingsbury for everything you have done for me and Texas Tech University! You believed in me when very few people did and helped me become the quarterback and person i am today!," Mahomes tweeted after being at Texas Tech's game Saturday since the Kansas City Chiefs were off this weekend.

In Kingsbury's first game as Tech's coach in 2013, Mayfield was the first walk-on true freshman quarterback to start a season opener for an FBS team. Mayfield later transferred to Oklahoma, where he was Heisman Trophy winner and became the No. 1 overall draft pick earlier this year.

Texas Tech used three quarterbacks this season, and all were hampered by injuries.

When junior McLane Carter suffered an ankle injury in the first half of the season opener, true freshman Alan Bowman took over and was the nation's leading passer before getting sidelined twice this season because of a partially deflated lung. Bowman missed the last three games after throwing for 2,638 yards and 17 touchdowns in eight games.

Bowman tweeted after Saturday's game that Kingsbury was "the best coach I ever had. Even a better human being. Y'all do not understand the work he puts in behind closed doors."